In the race to save the elephants will the US or China step up first?

By Jamie Joseph
On the 29th of May conservationists and Global Citizens all over the world were celebrating the Government of China’s announcement that they would eventually halt the commercial processing and sale of ivory and its products. This is, so far, the most monumental victory in the fight to save Africa’s elephants, and a major push back against greed, status symbols and corruption.
But the announcement was met with a healthy dose of scepticism as China has not yet committed to any timelines, and considering an elephant is killed every 15 minutes, every day that passes is a gamble on extinction – as populations across Africa decrease the criminal syndicates’ investment in ivory increases. According to a report by Environmental Investigation Agency, at least 90% of the ivory coming out of China’s carving factories is from poached elephants. This alleged ‘legal’ market is a front for the illegal market, and unless these markets are shut down, our generation will in all probability be the last to see elephants in the wild.
Following up with WildAid’s Hong Kong office, Wildlife Campaigner Alex Hofford reflected that China has a 5000 year history, and they’re not known for timelines.

Says Hofford, “In my opinion, when China takes an incremental approach, they do tend to stick to their word. I think China’s announcement was a tipping point away from favouring the trade towards favouring the conservation lobby.”

A few weeks ago I interviewed Hong Kong lawmaker Dr Elizabeth Quat, who, with support from WildAid, African Wildlife Foundation and Save the Elephants, journeyed to Kenya last year because she wanted to see with her own eyes the devastating extent of Africa’s poaching crisis. 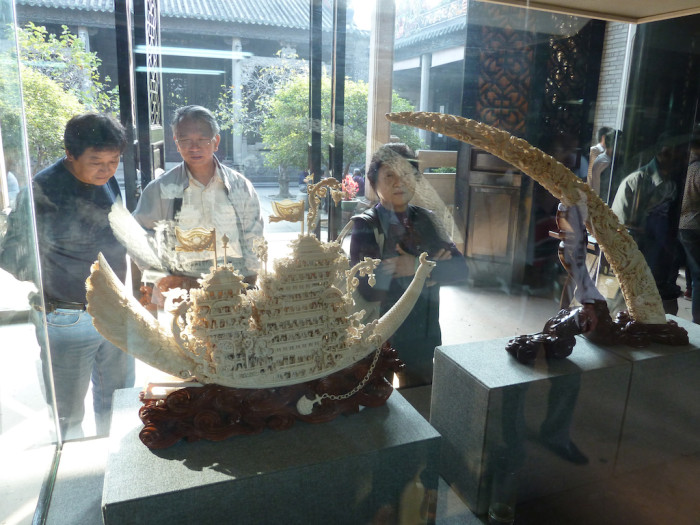 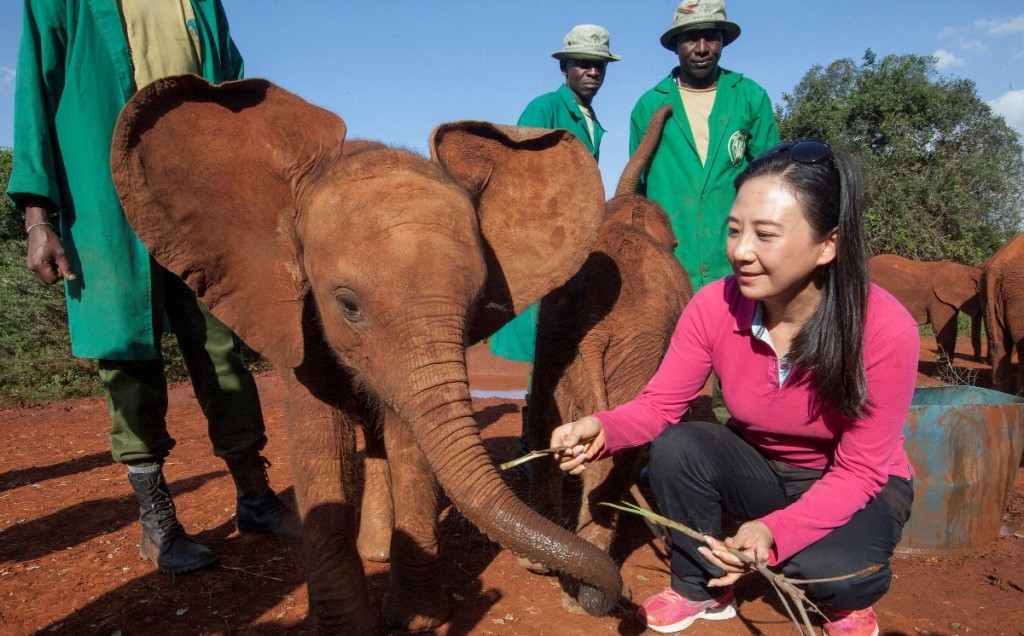 Photo credit: WildAid – Dr Elizabeth Quat visits DSWT Orphanage in Kenya
In March of this year, the Legislative Councillor crossed a major milestone at the National People’s Congress (NPC) meeting in Beijing, with 36 Hong Kong NPC lawmakers sitting in that meeting, she successfully lobbied 32 of them to co-sign a suggestion to the National People’s Congress Standing Committee, calling for a domestic ban on ivory sales. Any suggestion with a minimum of 30 signatures ensures that the government has to respond within 12 months.
The suggestion was put forward by NPC member Chan Yung as follows:
1. In order to effectively fight the illegal import and export of ivory and its products, besides enforcing the laws, there should be laws prohibiting commercial ivory & ivory products related activities illegal in the Mainland. A previous example was the reaffirmation of the ban on rhino horn and tiger bone trade in 1993 which adhered to regulations of CITES. The activities include sale, acquisition, transport, self-carry and postage. I suggest to a ban on sale, acquisition of all ivory and ivory products, as well as transport and self-carry for any commercial purposes.
2. To widely promote the awareness on conservation of elephants and other endangered species among consumers, encourage them to say NO to buying and selling of ivory products.

And so by joining all the dots, and fast forwarding one year from the time the NPC suggestion was lodged, it is logical to assume that China will be making some more commitments, with timelines, before March 2016.

In China’s 10 point plan to combat the illegal wildlife trade, delivered in the 29 May speech by Zhao Shucong, Minister of the State Forestry Administration, he acknowledged that, “President Xi Jinping and Premier Li Keqiang have made important instructions on how to better conserve wildlife, including elephant, on various occasions.”
And in point seven the promise of new Chinese thinking was delivered: “Seventh, under the legal framework of CITES and domestic laws and regulations, we will strictly control ivory processing and trade until the commercial processing and sale of ivory and its products are eventually halted.”


Within hours of these announcements coming to light the US Department of State posted a press statement commending China for their breakthrough commitments. And yet the elephant in the room still stands.

Why is the United States so slow to close loopholes and amend their own laws that are allowing the trade of ivory from recently poached elephants?

There are no ivory carving factories in the US, and federal laws restrict the import, export, and interstate sale of ivory, but intrastate ivory sales, such as Craigslist where people lean on the excuse that their product is pre the 1989 ivory ban, is not adequately regulated, and ivory antiques continue to sell as a smart investment.
In the last 12 months only New York and New Jersey have passed landmark bills that ban the sale and purchase of both ivory and rhino horn. In six states the bill was squashed due to opposition, mostly from the antique and hunting industry, but for around half of the US states it’s not even on their radar.
Searching for answers, I caught up with Patrick Bergin, CEO of African Wildlife Foundation, who is currently in Cape Town attending the World Economic Forum on Africa. Bergin is a member of the Advisory Council that advises the US Presidential Task Force on Wildlife Trafficking, which earlier this year unveiled the U.S.’s National Strategy for Combating Wildlife Trafficking. The Strategy reaffirms the U.S.’s commitment “to work in partnership with governments, local communities, nongovernmental organizations, and the private sector to stem the illegal trade in wildlife, a multi-billion dollar a year industry up there with drugs, arms and human trafficking.
Says Bergin, “President Obama has shown leadership, however American society is still lagging behind. What is needed is a broader grassroots movement that includes business, media, celebrity activists, and the general public, and can leverage its power as a groundswell of popular opinion to encourage strict legislation at the state level as a way of stopping intrastate ivory trade.”

The decimation of elephants is destroying not only Africa’s keystone species and the ecosystems that rely on the world’s largest land animal, but it is also fuelling conflict and terrorism, derailing tourism, and creating more unemployment and poverty. The current narrative must evolve, and society needs to understand that these animal issues are also human issues.

How do we turn this into a movement, in the way that blood diamonds permeated the conscience of American society?

“This cause has to become ubiquitous,” continues Bergin. “Just as we are currently seeing with airlines refusing to transport hunting trophies.”
But with just two US states having passed legislation, it begs the question if there is enough time to get America on side. Bergin points out here that it’s not necessarily the number of states who pass legislation so much as getting the most populous states in the U.S. to take action.

“Most of the population is on the seaboard. Some of the bigger states like California need to set the pace, in the way that California (ivory bill currently with Senate) took the lead on auto emission standards, and then other states like Virginia and Florida will be forced to step up. As in the tail that wags the dog.”

Another red flag is that US Fish & Wildlife (USFWS) is extremely under resourced. According to a trafficking feature in the Washington Post, fewer than 330 Fish and Wildlife inspectors and agents patrol the largest U.S. ports, about the same number as 30 years ago, when the agency’s law enforcement branch was formed. Since that time, international wildlife trafficking has grown from a small concern into a criminal cesspit. The amount of resources a government devotes to solving a problem indicates how serious it is in tackling that problem.
And if a government is not convicting criminals and handing down punitive sentences, that too can contribute to a culture of impunity. Why pedal drugs when you can pedal ivory or rhino horn or pangolin scales? The risks are so low; it’s a cake walk for criminals.
This is especially true in Africa, agrees Bergin. 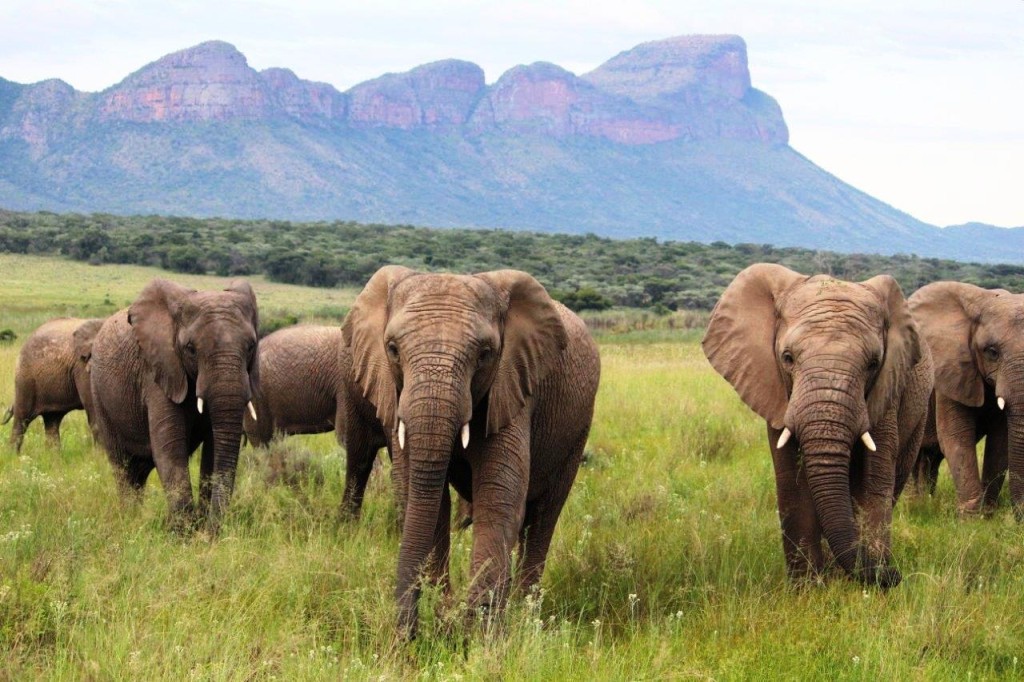 Photo credit: savingthewild.com
“We need more resources put into prosecution,” he says. “Hardly anyone is going to jail in Africa, and certainly not the ringleaders. Criminals need to see other criminals behind bars; otherwise the laws will never act as a deterrent.”
President Obama is to visit Kenya in July, and Bergin tells me they are trying really hard to ensure wildlife trafficking is on the agenda. The country is listed among the world’s eight most complicit countries as a source of ivory, and the Port of Mombasa is a major contributor to the illegal transiting of ivory out of Africa.
In closing, Patrick Bergin raises an interesting proposition: The Millennium Challenge Corporation (MCC) is an independent U.S. foreign aid agency that is fighting against global poverty. Before a country can become eligible to receive assistance, MCC’s Board examines its performance on independent and transparent policy indicators, and selects compact-eligible countries based on policy performance.

Aid from the MCC has the potential to be a powerful bargaining chip in exposing corruption in Africa, encouraging better governance, and stamping out the illegal wildlife trade.

Countries that include Mozambique and Tanzania are receiving hundreds of millions of dollars in aid, and yet they are continually caught out for being complicit in the trade of illegal wildlife. According to a new government survey, Mozambique has lost nearly half of its elephants to organised crime syndicates in just five years, and in November of last year the Environmental Investigation Agency (EIA) released a damming report that shows Tanzania as a key player in the illegal ivory trade. The poaching is due to a toxic mix of unlawful syndicates, often led by Chinese nationals, and corruption among some Tanzanian government officials. Recent government data shows that Tanzania’s elephant population has declined by a catastrophic 60% since 2009.
China and the United States will meet next month at the Strategic and Economic Dialogue where the two countries will discuss securing a ban on the commercial sale of ivory. Perhaps a little rivalry between these two super powers to do the right thing – first – may be just what the elephants need right now.

Jamie Joseph is a writer and environmental activist working fulltime on Africa’s poaching crisis. Join the conversation on Facebook and Twitter.

Follow up to this story, READ: Is the United States doing enough to save the elephants? 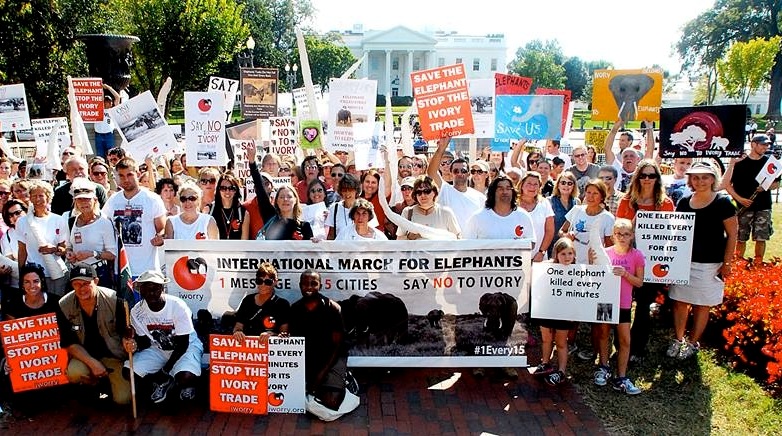 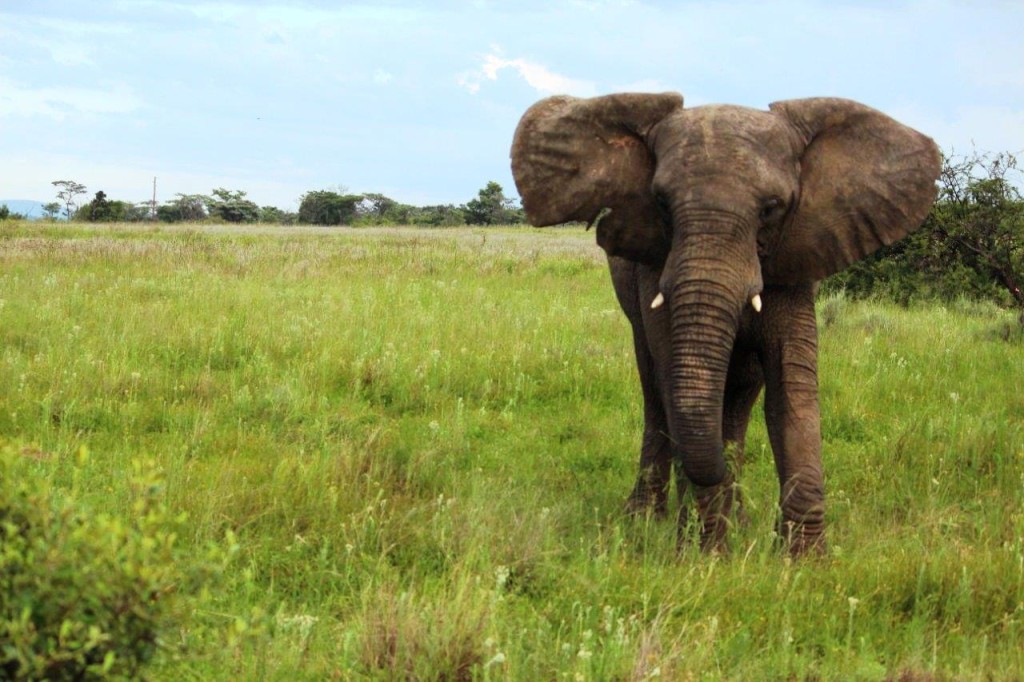 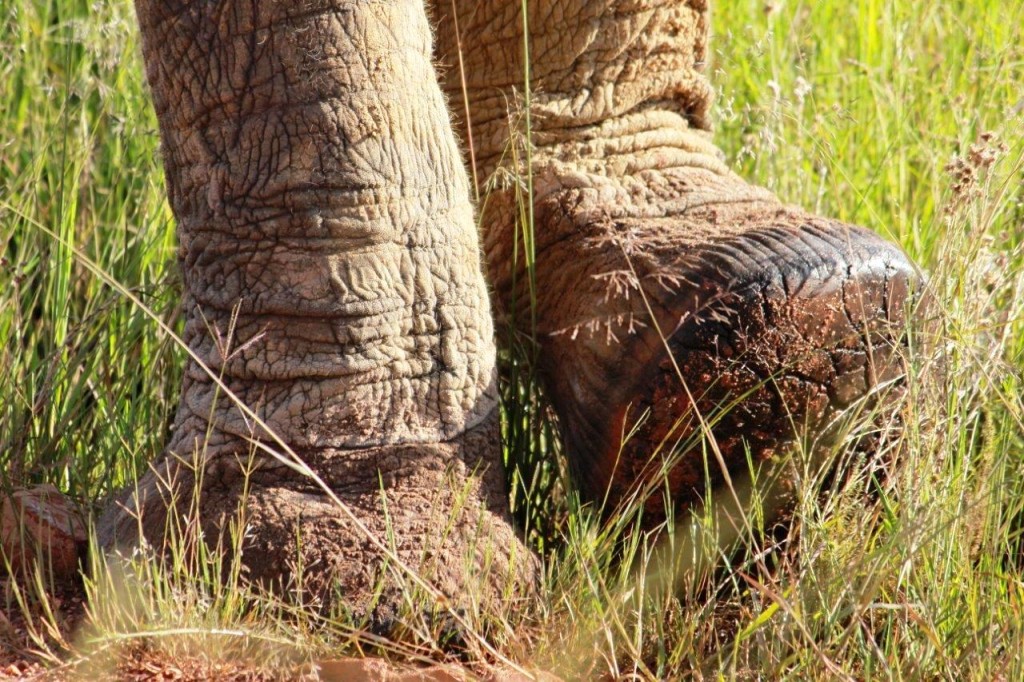 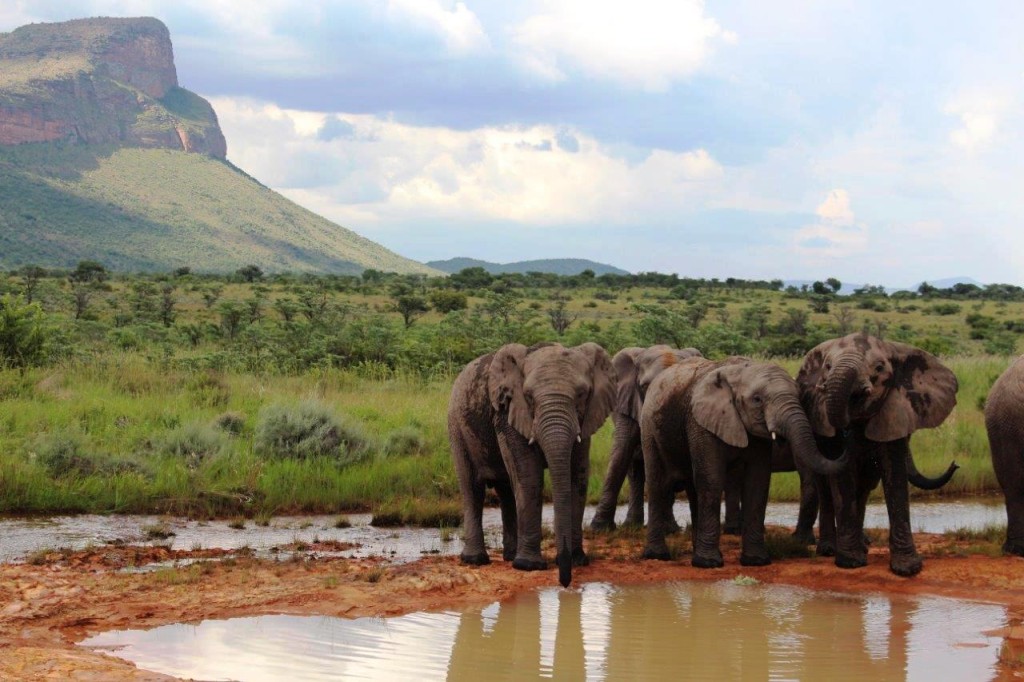 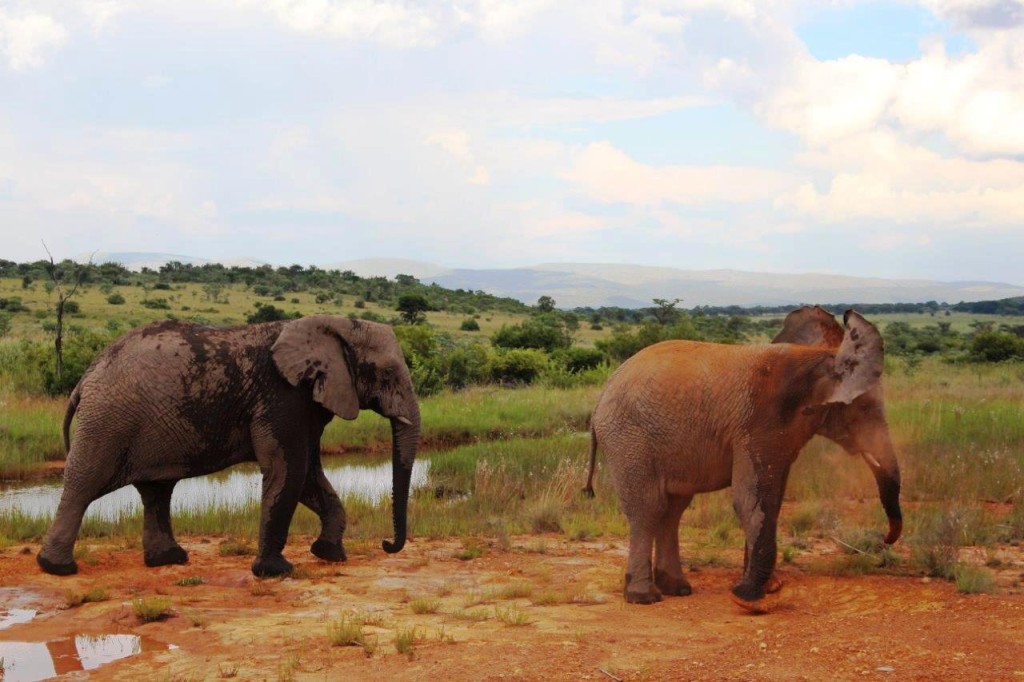