By Jamie Joseph #JusticeForRhinos
Friday 9 November 2018: When Mozambican Patrick Nkuna entered Skukuza court today, he did so with the weight of doom on his shoulders. After a slew of tactical delays dating back to his arrest in November 2015, including his demand for better Shangaan interpreters on three previous occasions, he could no longer outrun the consequences of his actions. As I looked into his eyes, hollowed and without emotion, it was as if he had already accepted his fate.
Trial would proceed today with the formidable senior state prosecutor Ansie Venter calling up the first witness, SanParks helicopter pilot Bradford Grafton. In a dramatic testimony, the pilot with 18 years experience described how the accused was finally apprehended after a long chase that began with a sighting of poachers in the Pretoriouskop area. At the time, Bradford was carrying a SANParks delegation on board, which included General Johan Jooste, Kruger South Regional Ranger Don English, CEO Fundisile Mketeni, and one board member, Mr India.
Grafton and English flew north to try locate the poachers and slow them down until the field rangers could catch up. “After about 1 to 1.5 kilometres, Mr English instructed me to turn back. As we began to turn around I saw three men hiding under a fallen tree,” continued Grafton in his testimony. “I indicated I had seen the suspects and I descended lower towards them. As we were orbiting, the suspects realised they had been seen. One suspect pointed a rifle at the helicopter at a distance of 20 to 30 metres from us.”

“He’s going to shoot!” recalls the helicopter pilot echoing his words at the time. “A shot rang out and English returned fire. The suspect with the rifle turned and ran. The three poachers scattered in different directions. We decided to follow the shooter. Then he suddenly slowed down and turned towards us as if he might shoot again.”

At this point, Don English opened fire beside him, provoking the suspect to drop his rifle and run. They pursued, with field rangers gaining ground.
“The suspect was ducking and diving into bushes and behind trees, and we were so close we could make out his face and eyes. Mr English shouted at him to stop.”
Senior state prosecutor Ansie Venter interrupted the testimony to ask Grafton if the suspect was in the room. “Yes, mam, this man to my left,” he said, pointing to Patrick Nkuna. 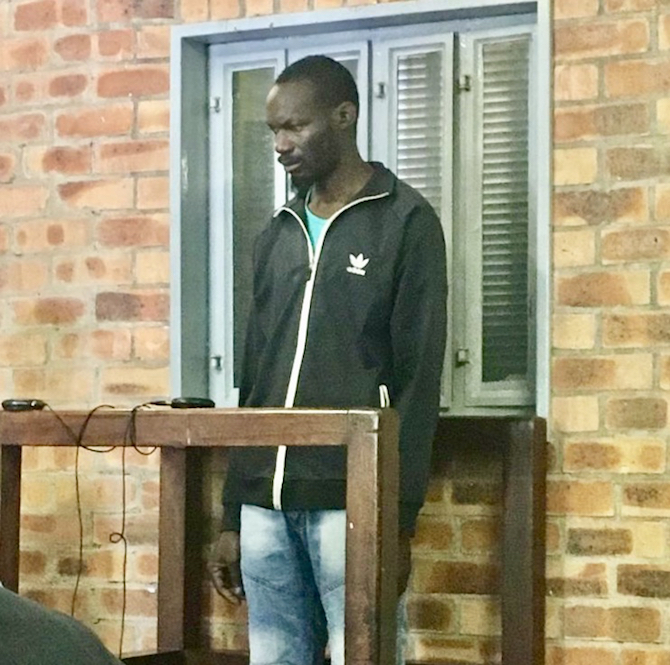 Rhino poacher Patrick Nkuna sentenced to 33 years in jail | Photo credit: Saving the Wild
But the suspect ignored the warnings from the anti poaching rangers, and he continued to run. This continued for a couple hundred metres until the helicopter was able to fly ahead and drop into a dry stream bed. Don English gestured to the suspect to walk towards the chopper. As he was just within reach, again he ran into the bushes. They immediately got airborne, and as the ‘cat and mouse’ chase continued, English jumped off the helicopter with the suspect unaware. The chopper was then able to manoeuvre in front of the suspect in a clearing.

“I flew low, half a metre to the ground. General Jooste was shouting at the suspect to stop. As he was turning around to see what was behind him, I used the skids of the helicopter to knock him on his shoulders, and as he stumbled, Mr English came up from behind. There was a struggle and he was apprehended.”

Recorded in court today, a single bullet shot might have caused the fifty million rand helicopter to crash and kill all the passengers in the process.
Trial was cut short just before the testimony of Don English was due to begin, when the accused Patrick Nkuna asked for a break to talk with his attorney. They returned with a guilty plea.
Nkuna was charged with 12 counts, including four counts of attempted murder, trespassing in a National Park, and possession of an illegal firearm. He was sentenced to more than 40 years, and 33 years and three months effectively.
Since this 2015 incident, the helicopter has been shot at in another four separate incidents by poachers. Earlier this week, on Monday November 5, the chopper and the fixed wing plane came under fire again.
This verdict by Magistrate Cloete sends out a clear message to the most ruthless of poachers. It comes exactly one week after Magistrate Ngobeni in the White River court granted bail to the two alleged kingpins of Kruger, Petros Sydney Mabuza aka “Mr Big” and Joseph Nyalunga aka “Big Joe”. This bizarre judgement passed by Magistrate Ngobeni was a devastating blow to anti poaching efforts, and a reminder that corruption is the biggest thief of all.

Today a battle is won, tomorrow the war continues. Every day rangers wake up, not knowing if today is the day they draw their last breath. The least we can do is honour them with justice. And never, ever give up on the pursuit of justice.

In the wake of “Mr Big” and “Big Joe’ being granted bail, Saving the Wild is now moving in on Kruger. Join the crusade against corruption on Facebook, Twitter, and Instagram #StopRhinoKingpins.

Read: #BloodRhinoBlacklist: The fall of a crooked cabal of magistrates and lawyers