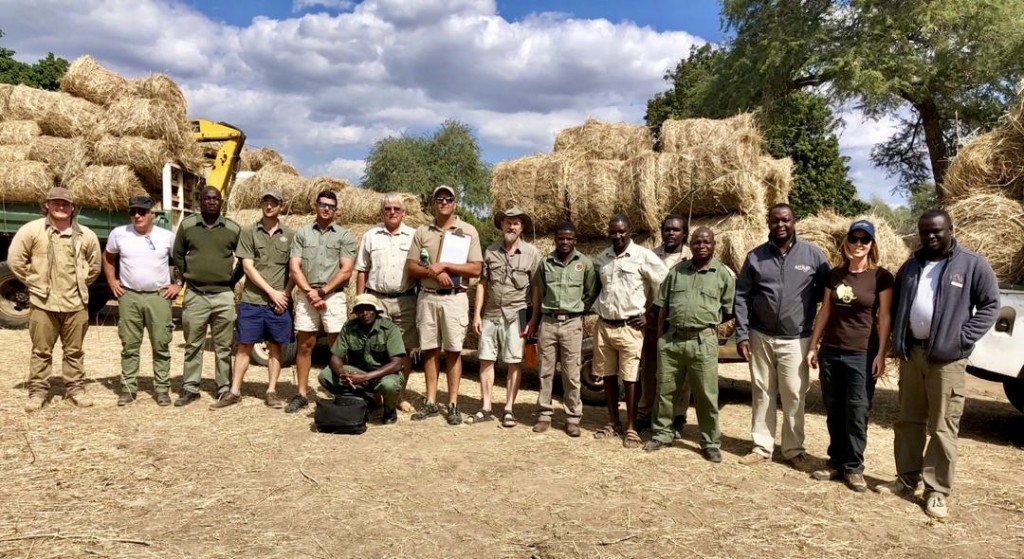 15 July drought mitigation meeting with Mana Pools stakeholders
Latest update 18 July: ZimParks is leading a Mana Pools Drought Mitigation Plan. Currently ecologists and vets are on site in Mana, assessing the land and wildlife, and choosing the best locations to drop feed for the starving animals. Grass and trucks have already been donated.

As a matter of urgency, Mana Pools Stakeholders are requested to please raise funds for diesel for the trucks. We estimate 25 000 to 40 000 litres, with an initial target of US$25 000 needed to be raised. 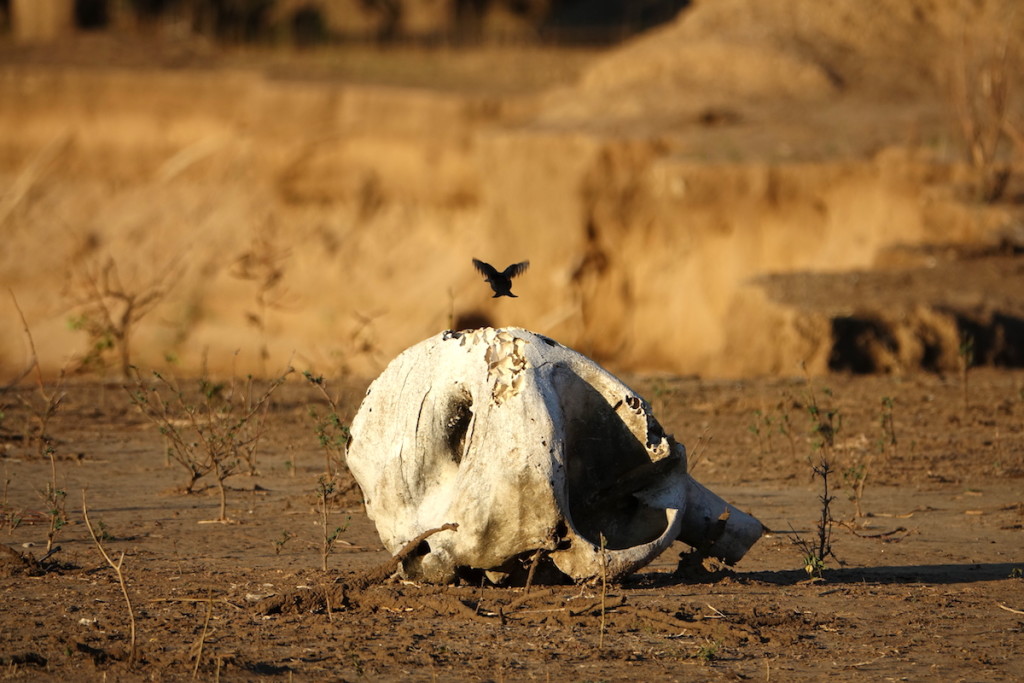 According to UNDP Zimbabwe, the country is exhibiting severe droughts, a sign of climate change
A UNESCO World Heritage Site, and a treasured jewel of Zimbabwe, Mana Pools National Park takes its name from the pools that still lie in the abandoned river channels that run through the terraces. Mana is said to mean “four”, referring to the largest of these pools which hold water all year.
It is now the start of July, and the water has dried up in two of the four pools, Green Pool and Chine Pool – conditions one would expect to see in the hottest month of October just before the November rains. The rain fall was extremely low this year, unprecedented, about a quarter of the park’s average. The conditions we are experiencing now is reminiscent of the 1992 drought, when human intervention was necessary.
Walking across the arid land where one would expect to walk on ground cover, all that is left is the remnants of termites, so desperate they are feeding on anything they can sink their jaws into, from the sticks to the dung of impala.
The knock-on effect is soil erosion as there is no structure left on the ground.
I have been guiding in Mana Pools for 16 years and I have never seen it so dry. Soon the termites will have nothing left to eat and they will die off. And then guinea fowl, and the anteaters, including the critically endangered pangolins, will lose a key food source.

1 July sighting of starving mother and baby elephant
Some mother elephants with young babies are already just skin and bone. For now, the big bulls are coping because they can reach the tallest branches, but soon even those leaves will be gone. When inspecting the dung of some elephants, I have seen it to be soft and gooey as opposed to dry straw texture. This is a visual sign of an upset stomach as a result of feeding off mostly dead twigs. And more and more we are seeing elephants eat the leaves on Trichilia trees, which is poisonous to them, but desperate times is making the elephants do desperate things. Some of the Mana elephants, world renown for their tolerant and gentle nature, are already showing signs of aggression. 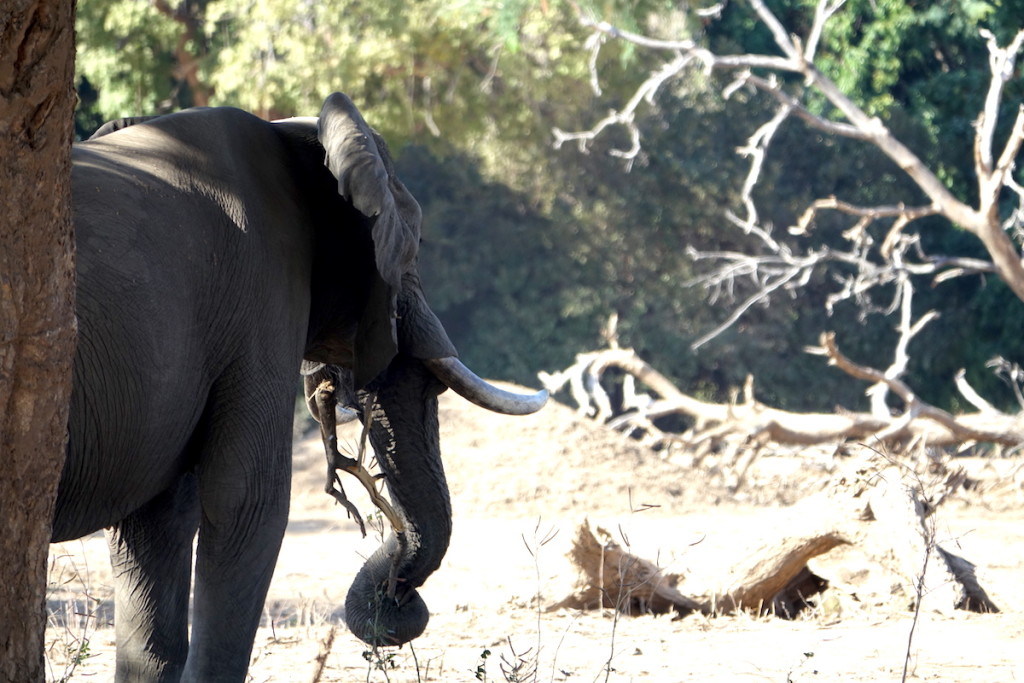 The iconic Mana elephant bulls have been forced to feed on dry sticks, which is making them sick.
If we lose Mana Pools iconic elephants, and a vast amount of wildlife including birds, the tourists will have no reason to come here. I will then be unemployed and have no way to support my family. A lot of livelihoods are at stake.
The usually skittish impala are walking in gaunt to our campsite, every rib exposed, becoming tamed with starvation. Impalas and baboons are the first to die, and the fear is that anthrax and other diseases will follow, infesting the land and spreading widely. 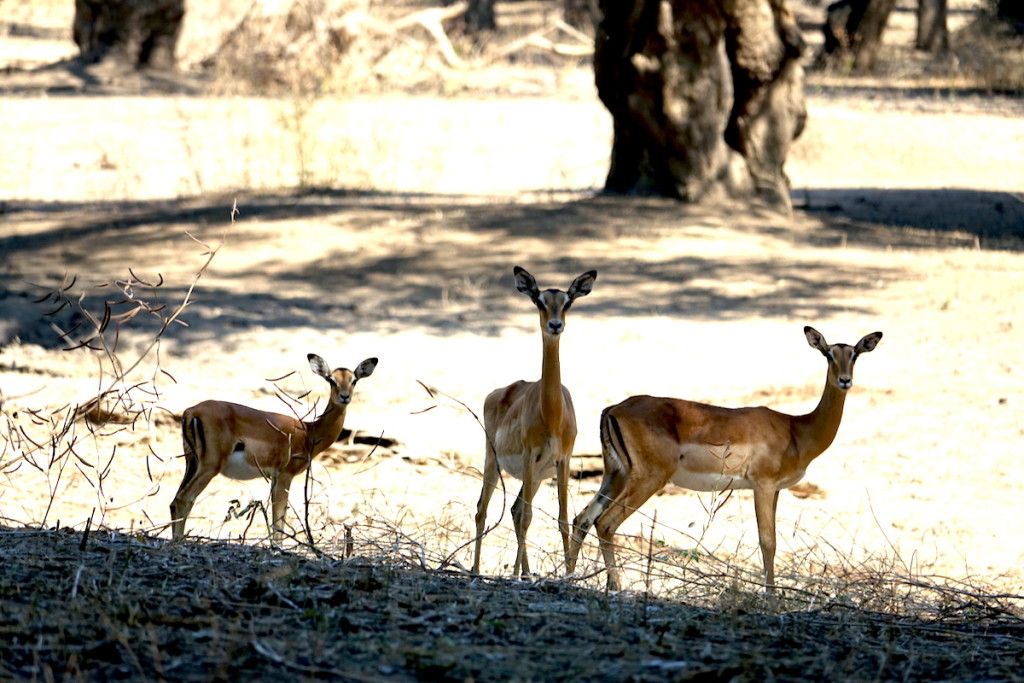 Impalas are often the most vulnerable to anthrax 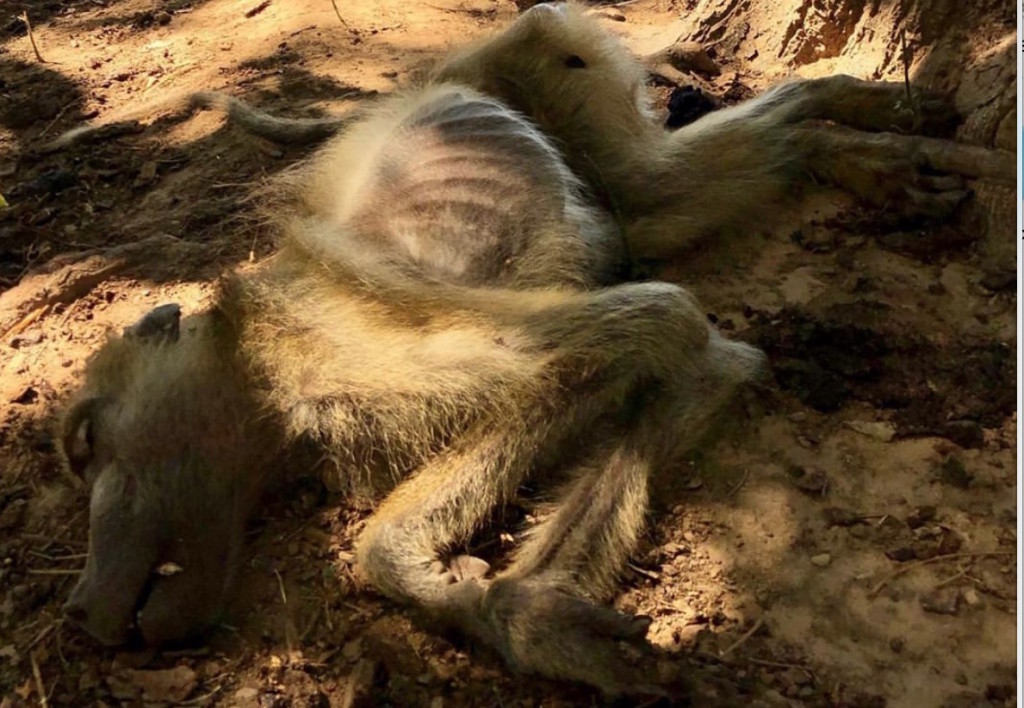 Between Climate Change, habitat loss and poaching, humans are driving endangered species into extinction. Intervening in nature is necessary during such a crisis as an unprecedented drought – catastrophic to both our natural heritage and the wildlife tourism sector of Zimbabwe.

Referring to UNDP Zimbabwe website:
Zimbabwe faces multiple challenges for sustainable development associated with biodiversity loss, ecosystem degradation, and climate change consequences.
The Lower Zambezi Valley of Zimbabwe, home of the ‘Big Five’ animals, has been identified as one of Zimbabwe’s hotspots. This protected area which includes the Mana Pools National Park, and the Chewore, Charara, Hurungwe, Dande, Doma Safari Areas, is designated as a World Heritage Site, Important Bird Area, Biosphere Reserve and Ramsar Site and it represents a source habitat for many populations of wildlife species, including elephant and lions.
MAJOR CHALLENGES:
– Zimbabwe is exhibiting signs of climate change such as severe droughts, flooding and shifts in seasons.
– 40% decline in elephant population between 2001 & 2014 in the Zambezi Valley
Further reading here. 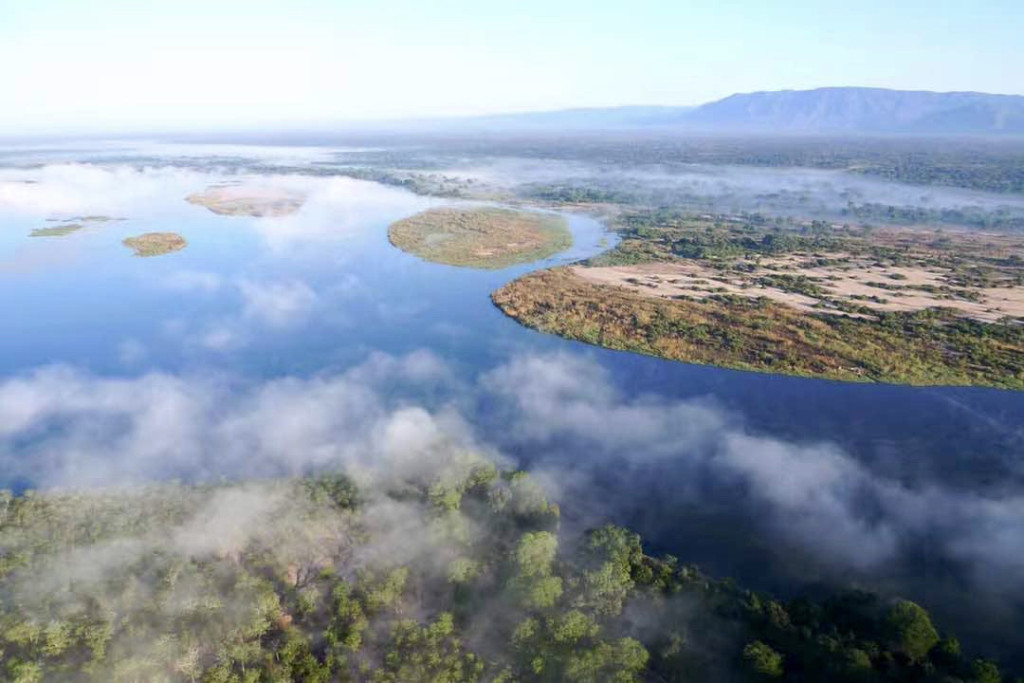 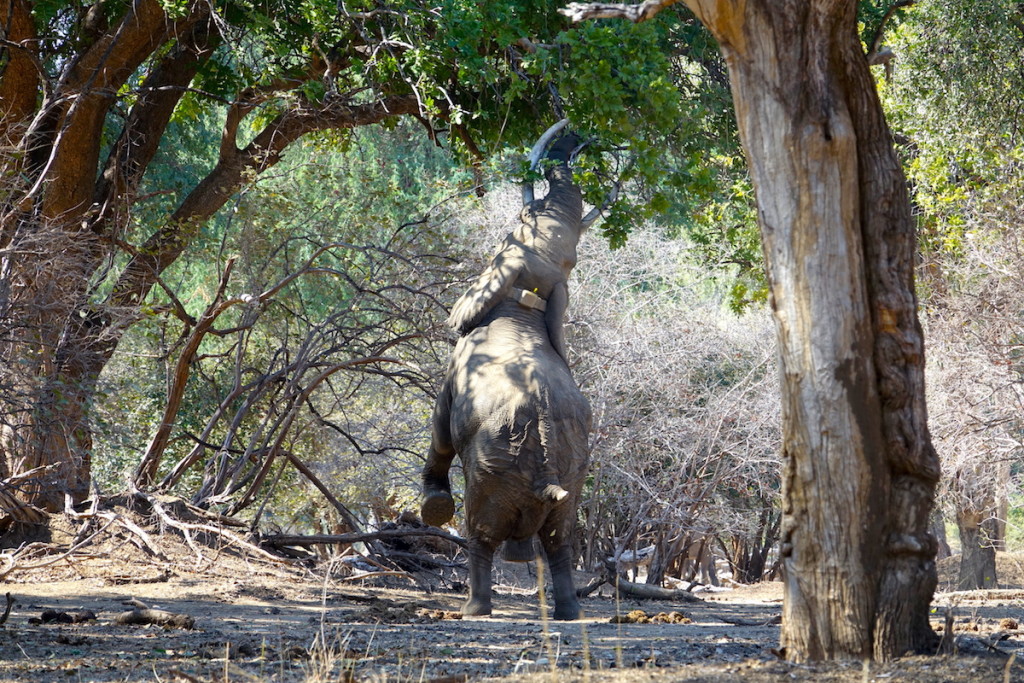 Famous “Boswell” is one of few elephants in Africa who can stand on his back legs and reach for the tallest branches to feed. If he dies in the Mana drought, a significant part of this important gene pool will be lost forever. The loss of an iconic Mana bull will also have a huge, negative impact on Zimbabwe wildlife tourism.