By Jamie Joseph
The Boeing 737 circled twice before landing at Victoria Falls airport. Baboons were having a blast on the runway and had to be shooed off by airport ground crew before we could land. TIA – This is Africa; my homeland, my braveheart, my heartbreak.
Elephants and rhinos are being slaughtered to extinction, and for no other reason than to feed Asia’s insatiable demand for symbols of wealth. The ivory tusks and rhino horns are smuggled out of Africa by international syndicates, and this environmental terrorism is fuelling poverty and war, and raping Africa of its natural heritage.
Fortunately there are global citizens around the world that are refusing to accept a world without our iconic species, that believe humanity is lesser humanity without all of life’s creations, and are joining a movement of eco warriors.
The IAPF Green Army Volunteer Programme based at Stanley & Livingstone Private Game Reserve in the majestic Victoria Falls, Zimbabwe, is providing a platform for civilians with no previous experience to join the rangers out in the bush and support them in saving Africa’s wild. Across the continent, rangers are drastically under resourced, and with an elephant killed every 15 minutes, and a rhino every seven hours, every little bit of help really does count.

I joined the IAPF Green Army for the first week of November, just in time for full moon patrol. This is when elephants and rhinos are most vulnerable because a clear night and a bright moon is a poacher’s paradise, providing visibility in the darkness of their deeds.

I arrived just in time for a delicious dinner cooked by Chef Hope, joining the other seven volunteers that had arrived a day earlier, and long before the last mouthful I just knew that the next two weeks were going to be incredibly rewarding.
There was an Aussie contingent, not surprising considering IAPF was founded by Australian ex commando Damien Mander who has been an inspiration to me ever since I saw him speak at TEDxSydney in May last year. Henry and Gen represented Europe, an entrepreneur from The Netherlands and a student doctor from Germany, and of course me, the wanderlust African storyteller. But everyone had great stories, such as Greg and Jess who had just returned from Uganda visiting the silverback gorillas and described it as “the best 90 minutes of their lives.” Also at the table was Corey, Senior Ranger and Volunteer Coordinator, I honestly cannot imagine a better chief. He’s clearly committed, a down to earth Aussie with Africa under his skin, he really knows his stuff, and he does great animal impersonations too. 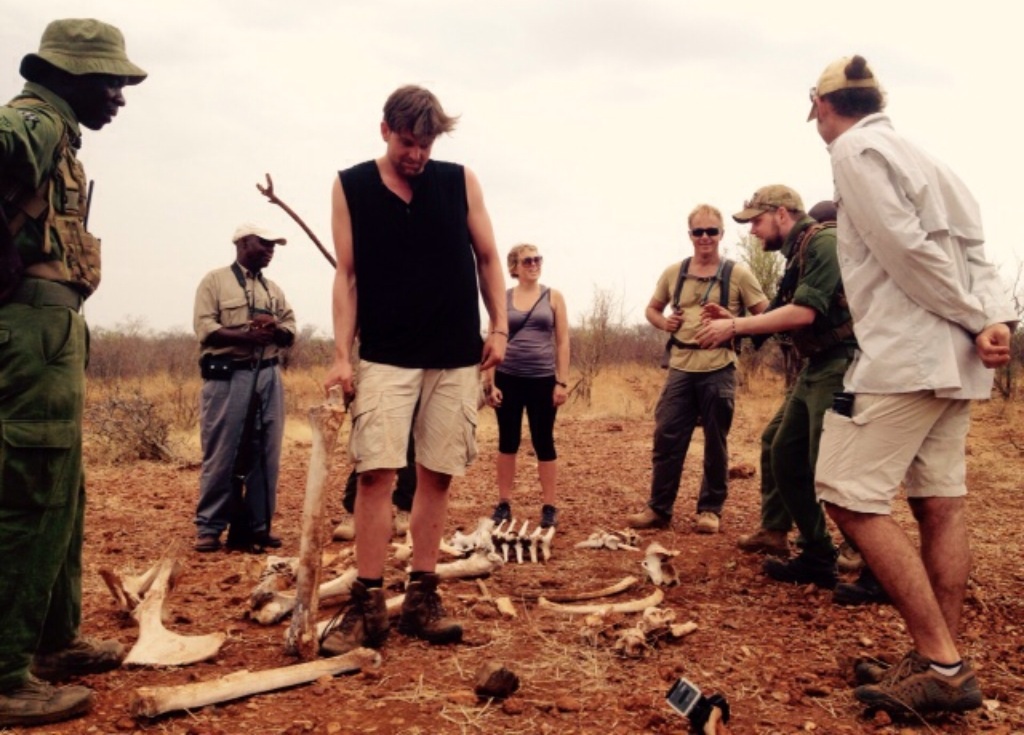 Photo credit: Jamie Joseph / savingthewild.com
Now this is a working camp, so if you can’t live without a private bathroom and four walls then the IAPF Green Army is not for you. The tented accommodation is the only thing separating you from the pulsating bush music of Africa’s wild. Other than crocodiles, which live far away in the dam, humans are simply not on the menu. Knowing this, I get a thrill every time I hear the distant fog horn of a hippo, trumpeting elephants, the howl of hyenas, or the lullaby roar of lions.
Following an after dinner power nap, we picked up the rangers at base camp and then Corey dispatched us in groups across various viewing points of advantage overlooking the boundary of the wildlife reserve. The rangers were armed with a gun and a smile, and I never for one moment felt like my life was in danger. The IAPF rangers have an impeccable record, and in the four years since they took over anti poaching on the 2700 hectare reserve they have never lost a rhino or elephant. The word is out that poachers need not waste their time coming here because the IAPF rangers are guarding these prehistoric treasures with relentless dedication and strategic smarts. Having a rock solid consistent presence is vital in holding off intruders.
Throughout the night we rotated through sleeping shifts, us volunteers loaned our ears and eyes, listening intently and watching with night vision goggles for any signs of human movements; the brief flash of a mobile phone, a rustle of footsteps in the bush, the dreaded gun shot. Had anything gone down the rangers would have called it in over the radio, and then rangers and policemen on call at base camp would intercept.

But just being out there in the bush, camped out under the moonlight, listening to the calls of the wild, watching night jars sweep past in a dazzling swoosh, and feeling the beat of the land in my chest, it’s transcending. Nothing makes me feel more alive.

The highlight of the evening, all two and a half tons of him, appeared on the drive back to camp. Fortunately Corey had given us a teaser introduction to animal behaviour, one of many interactive lessons which takes place in the IAPF open air classroom. Sometimes, if you encroach on an elephant’s comfort zone, or you bump into an ele with raging hormones, he will mock charge, and on the rarest occasions he will charge for real – and then you better drive away fast, very fast! Now a mock charge, aka a warning charge, has some tell tale signs, such as ears flapping and head shaking to appear bigger and more powerful. In a real charge, the ears go flat and the head goes down to protect the trunk.
Tough Guy, we shall call him Tough Guy, saw us before we saw him. We had dropped the rangers off at base camp and were cruising back to our camp just as the pale pink moon began sinking into sunrise. To our right we caught sight of a herd of about 20 elephants browsing languidly at the side of the road, and then this young elephant, Tough Guy, about five years old – but in human terms going through the “troublesome teenage years” – lifted his trunk to smell us and began trumpeting. He advanced about twenty fast paces towards us, shook his head and pulled at branches, and then he went through the motions again, moving a few metres closer every time. Some of his family members glanced over at the young fellow, with that “oh there he goes again” look, and then gracefully returned to their sunrise breakfast.
We were all in the back of the roofless Landy, with Corey driving, and when I peered through the glass pane separating us I saw that Corey was grinning with delight.
“Mock charge,” I said to the others. “Awesome!”
People were cursing for not having a camera ready and instead of crouching down in fear of a charging elephant, we were all falling over each other trying to get a better look. And then suddenly Tough Guy was on the road, coming up from behind, trumpeting and shaking his head with all his teenage angst. Unfortunately after a few hundred metres he got bored of chasing us, but it was a few hundred metres of fizzing adrenalin.
Elephants are sentient beings that have mastered the art of communication beyond human understanding. And ever since I was a little girl, ever since that very first time I saw these enigmas in the wild, a family frolicking at a waterhole under a bewitching African sunset, my little heart was suddenly so full with them. I never knew how much I loved them until that very moment.
Humans have a lot to learn a lot about love and loyalty from these compassionate giants. Compassion; ultimately it is the game changer that can save elephants from a brutal extinction. We are in the midst of a wildlife holocaust, and I struggle to understand how a civilisation as advanced as we are can still be so savage. People that are buying ivory trinkets and ivory carvings need to stop and take a long, hard look at the mirror and decide how much blood they really want on their hands.
They need to make a choice: this craft, or this species?

In part two of The IAPF Green Army series we meet the adorable baby rhinos of the reserve and their very proud mums, we learn the lowdown on animal behaviour, snare patrolling, and we get taught how to save a life. And then it’s the weekend off, wet and wild, white water rafting down the mighty Zambezi river.
Follow the journey on Facebook and Twitter.