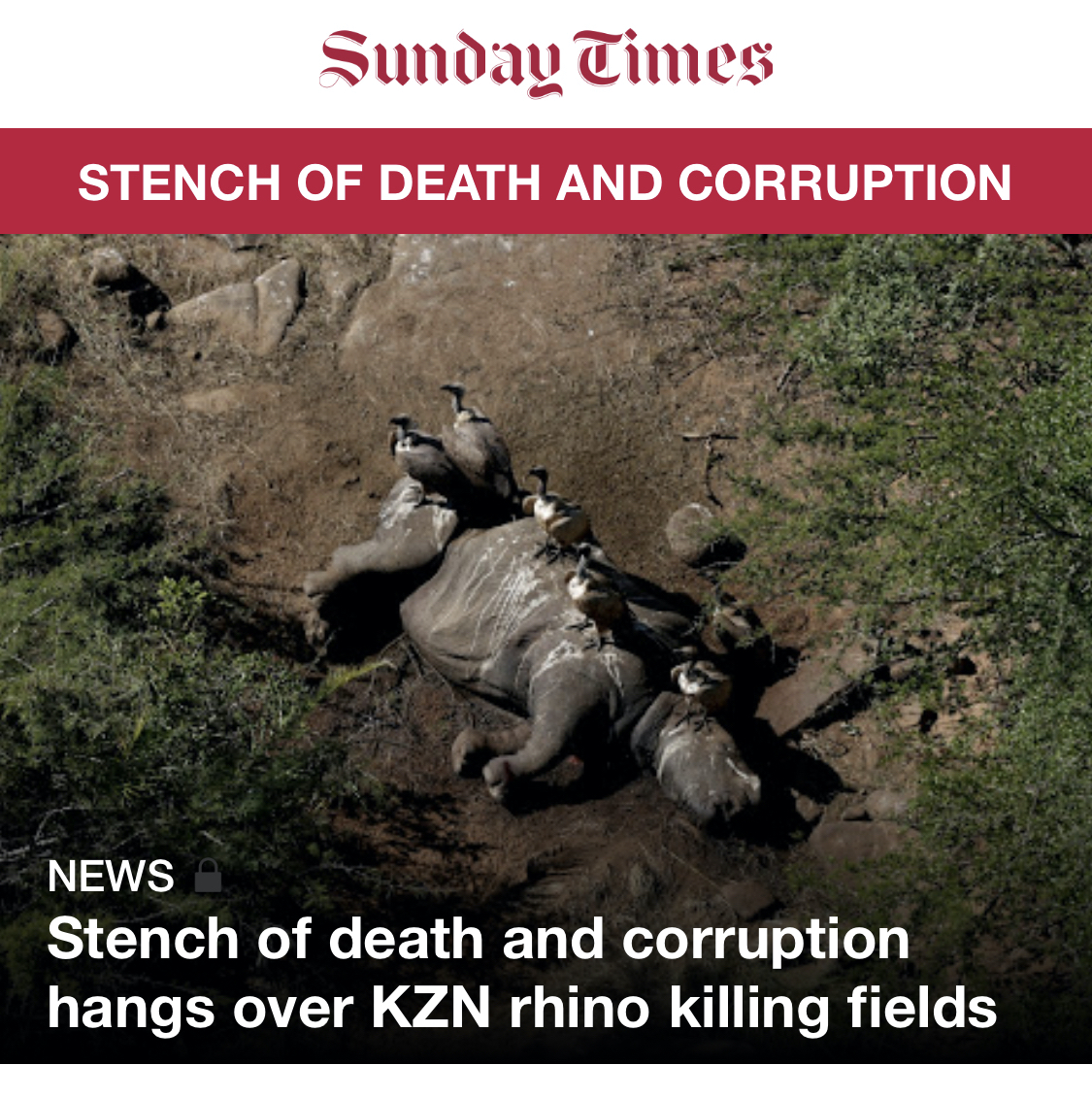 This article out today in the Sunday Times is a contradiction of quotes, and so I will explain what is really going on…

Sunday Times: At least 106 rhinos have already been slaughtered in Hluhluwe iMfolozi Park since January, four more than the total for the whole of last year – an ominous start that could mean 2022 will be as bloody as 2017, when poachers killed a record 222 rhinos.

The latest spate of rhino killings has deepened concern among conservationists who are pushing for action against the management of Ezemvelo KZN Wildlife. They say KwaZulu Natal Premier Sihle Zikalala has refused to make public a report on rhino poaching at HiP. According to sources involved in the compilation of the report, it goes into alleged links between poaching and the management of Ezemvelo KZN Wildlife.

EXPLANATION: On Thursday I had an meeting with one of the three authors of the report, because I wanted to express in person my frustration and absolute disgust that he extracted sensitive information from many of us in the private sector back in 2017 – under the passionate, convincing premise that this report would be released and bring real change. His response was that we must now find the money to take this to the High Court in order for a TAX PAYER FUNDED report to be released.

I cocked my head to one side and saw his office wall was covered in Ezemvelo plaques, commending his service to the organization. I commented that I found it concerning that someone so entrenched with Ezemvelo was even tasked with writing the report – surely this is a conflict of interest? He didn’t think so.

I asked him if the report had been squashed because it would expose former HiP boss Jabulani Ngubane. According to the author of this report, and all three authors who I met with at HiP in 2017, rangers working in the park had made confidential statements to The Task Team to the effect that their boss at the time, Jabulani Ngubane, had taken money from some of them for a pyramid scheme. Then, instead of paying back the money, he promoted certain rangers who did not have the experience to be in such senior roles, such as a section ranger.

What followed were rhino massacres in that section.

What is happening now is a reboot of 2017. As I explained several social media posts back – and watch video interview below – I was recently able to enter HiP with no ID and nothing but a R5 receipt for a map book. After I exposed all the corruption in 2017 certain people were “shifted” out of the park and poaching dropped drastically…but now with the rhinos in Isimangaliso and Kruger mostly wiped out, the poachers are circling back.

Referring to the Sunday Times article…

MEC Ravi Pillay claims the reason for squashing the report is because, “It is my considered opinion that it will not be in the public interest to release the report into the public domain at this stage. The authors specifically classify important parts of the report because of its sensitive nature in relation to its impact on further investigations.”

WHAT INVESTIGATIONS??? THE POACHING CRISIS IN HIP ESCALATED TO RECORD DEATHS ONLY WHEN THE PEOPLE RUNNING INTEL DRIVEN INVESTIGATIONS WERE PUSHED OUT BACK IN 2017. EVEN HIP’S ACTING MANAGER ADMITS THIS…

“The police crime intelligence unit had shared information in the past, but due to changes in police management, such support has stopped.”
-Sihle Nxumalo

In other words, what we have now is a bunch of rangers walking around HiP hoping to bump into poachers. It’s a formula for total annihilation.

Ezemvelo has all the excuses in the world, and they keep saying they don’t have enough funding and resources. Fine! Then let HiP go. Hand it over to a private-public partnership that can protect the rhinos and all wildlife in the park and bring integrity back to this once global conservation success story.