By Jamie Joseph
“No rush. I’m in the car park sitting on the roots of a giant fig tree,” wrote world-renowned nature photographer Thomas D. Mangelsen in a text message that beeped as I raced the final stretch to Richards Bay Airport; the gateway to South Africa’s Zululand wilderness. I was running late because our rhino poaching investigations team was united for the first time with our China/Vietnam investigators, and a one hour meeting rolled into many hours that continued long after I left the breakfast table.
We were excited.
Tom understood. He is one of our biggest supporters, and is at andBeyond Phinda Private Game Reserve capturing the magic of the elusive, unpredictable black rhino, culminating in an exclusive ‘Saving Africa’ photographic auction in Los Angeles.
Some of the funds raised from the auction will go towards andBeyond and Great Plains Conservation’s Rhinos Without Borders initiative to translocate rhinos to Botswana where there is political will to protect their wildlife and the diminishing gene pool. The majority will be invested in our new legal fund where we will battle it out in the courts in Zululand, and create a blueprint that can scale nationwide.

Kruger is starting to stabilize, but rhino poaching in KwaZulu-Natal is out of control, up by around 40% for the year 2016, with at least 162 rhinos killed compared to 116 in 2015. 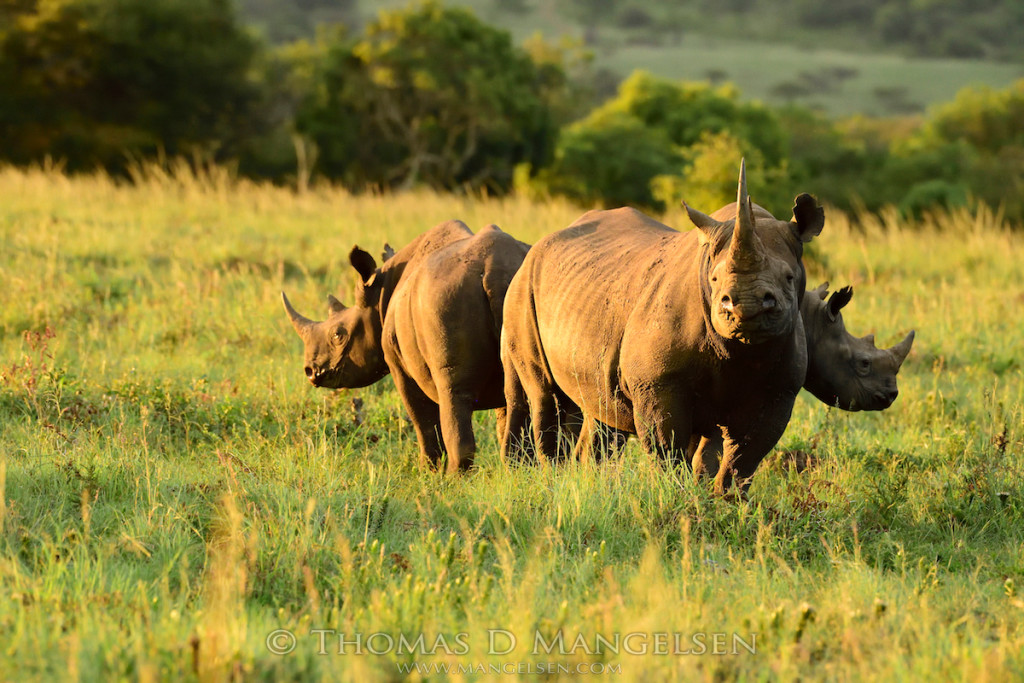 The law in South Africa is not acting as a deterrent to rhino poachers. The government smokescreen tries to keep the fires burning with headlines of poachers being arrested, but very few go to jail.

Spending a long stretch in a wild wonderland is a potent elixir that leaves one reeling to fight harder for justice. The Phinda guides and trackers too were in their element, spending more than ten hours a day observing the rare black rhino, of which there are less than 5000 left in the world.
Tom has visited Africa 17 times, and he’s seen a few black rhinos over the decades, but they were all very skittish. Not at Phinda, where they are fiercely protected by outstanding anti poaching units. Since the rhino crisis began back in 2006, Phinda has lost very few rhino, and much of that credit goes to the communities that border the reserve; the eyes and ears on the ground reporting any suspicious vehicles and behaviour.
Our first day on game drive was certainly unforgettable. We passed through that thick bush black rhino are drawn to, and spotted a big bull in the open by a small watering hole. Our guide Eric turned off the vehicle and we waited for the bull’s next move.

White rhinos seemed to have this attitude that they’re bigger than you, and so they don’t really care that you’re there. Black rhinos are not subtle. They want to know what you are, and why you are in their territory.

Photograph by Thomas Mangelsen / mangelsen.com
The bull gets up, breathes in the scent of human, and just as he starts to take a few strides over to us, something in the air catches his attention. He tilts his head up high and curls his lip. This action called flehming is a black rhino characteristic of seeking out the scent of a female. Tom is leaning across the vehicle roll bar, his 500mm lens sunk low into a bean bag and the AK47 click-click-click of the shutter penetrates the atmosphere.
The bull swiftly turns his head in our direction, he knows we’re there, but he’s got other things on his mind. This flehming goes on for at least ten minutes as he moves from bush to shrub marking his scent with a spray of urine. Then he zones in on us like a one ton tank on the move and begins to approach from Tom’s side of the vehicle. I’ve been around rhinos long enough to know the bull is about to charge, but the odds are also in our favour that he will likely stop before we collide. A master at work, I look over at Tom to see how he reacts. He drops to the floor of the vehicle and aims through the gap so that he is eye level with the bull.
The bull charges. All hearts beat faster. Tom responds with a click-click-click and this continues long after the dust has settled and the bull is standing just a few feet away.
A minute later the bull shows us his rear and sprays a thin wave of urine all over Eric. There is a rumbling roar of laughter. The blackie then wanders over to a low rock twenty metres away and begins scratching his belly with his front and back legs either side. Game over. 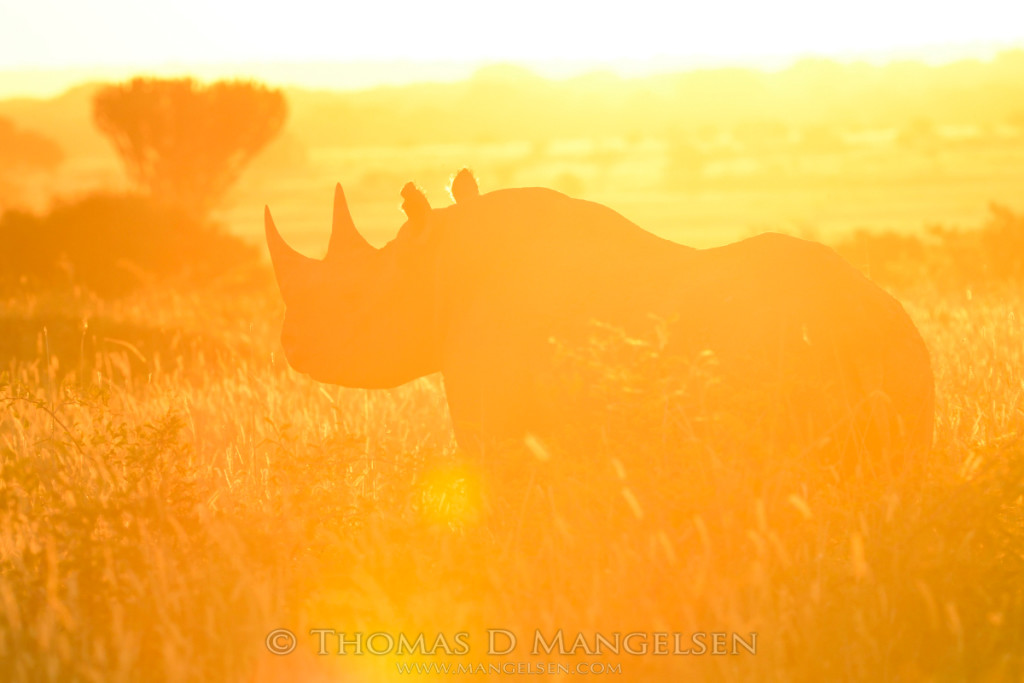 Photograph by Thomas Mangelsen / mangelsen.com
As the moon rises across a pale blue sky, the bull strides towards the west, stopping to breathe in the wild air of the land. He turns parallel to our vehicle and we feel the flux of history. From his two horns to the high tip of his rump, the black rhino’s imposing profile assaults the senses like nothing else on earth.

“It is our duty as guardians of the natural world to ensure rhinos don’t end up in a museum with the dinosaurs. These prehistoric icons are the last living descendant of a lifetime 50 million years ago. If we lose the rhinoceros, we are amputating pieces of our own evolution, and pieces of our own humanity.”
-Thomas D. Mangelsen