In part 1 of this interview with WildAid’s Executive Director Peter Knights, we delved into what it will take to win the race for new Chinese thinking and turn the tide on the illegal wildlife trade. In part 2 we tackle rhino farming, corruption, King Pins, and the demise of law enforcement.

At more than $10 billion a year, illegal wildlife makes up the world’s fifth-largest illicit market behind drugs, counterfeit, human trafficking and smuggled oil. The trade is an environmental and security challenge that is decimating iconic species, fuelling corruption and conflict, and putting many human lives at risk.
Law enforcement efforts have not been able to curb the illegal wildlife trade. Every year hundreds of millions of dollars are spent protecting animals in the wild, yet virtually nothing is spent on stemming the demand for wildlife parts and products. WildAid is the only organization focused exclusively on reducing the demand for these products, with a message that has become a mantra for people worldwide: When the buying stops, the killing can too.

“We spent trillions of dollars in the war on drugs, we have the most draconian of penalties including the death penalty, all the resources and sophisticated gear we could dream of, and it has been an epic failure,” says Peter Knights. “So why do we think – using the smallest fraction of those resources – we’re going to win the war on poaching by solely investing in enforcement?”

Clearly trying to replicate that approach for wildlife is not likely to succeed. We’re never going to have that much money, the political will, or the sentencing. On the other hand, the reason the drug war hasn’t worked is because the demand hasn’t been impacted at all.
“Wildlife goods are not addictive, it’s not associated with poverty and despair, and it’s not mind altering. And so curbing the trade should be evidently more susceptible to a demand side approach. But then you look at the resources being put into the movement of conservation and you will likely find around $150m a year spent on elephant protection, studies, enforcement and international meetings. Until recently nothing was going to demand reduction, and this year maybe $1.5m – all from non government sources.”
Why are we not catching the King Pins? We hardly ever hear about them.
“There is a lot of superficial reporting, but no one is going really deep,” says Knights. “I’m not quite sure why. It’s not an easy job and it’s expensive. The problem is jurisdiction or lack of it as soon as a border is crossed. And then on top of that there is corruption through the ranks in some key countries.”
A total worldwide ban would make the illegal trade a lot easier to enforce, and also send a clearer message to the public. And whilst law enforcement has failed in the past, on the other hand we have a history of curbing the demand for endangered species. Europe is no longer a major consumer of ivory, and Taiwan, once the biggest consumer of rhino horn, isn’t even on the map anymore as a result of education and strict domestic laws.
Right now the US government is proposing $45m to spend on combating the illegal wildlife trade. Their plan is three fold: stop the poaching, stop the trafficking, stop the demand, but how exactly is the money being spent?

“As far as we can make out, right now almost nothing is going to be spent on demand reduction. This bias has been going on for years, and it’s incredibly frustrating because we’ve already been through these discussions with Washington about a decade ago. Customs, Fish & Wildlife, and other agencies were present, and we all agreed education and demand reduction was actually the most important thing, but none of the agencies had budgets to do that work. The people with the money are law enforcement orientated, and they don’t have the experience to judge a good proposal for demand reduction – so they don’t do it.”

International trade in rhino horn has been banned since 1976, but last year South Africans and global citizens around the world were outraged when the Minister of Environmental Affairs, Edna Molewa, announced that the country would back the establishment of a regulated international trade in rhino horn, and seek permission from CITES in 2016 for a one-off sale of stockpiles worth around $1 billion.
Vietnam is a country with 80 million people compared to China’s 1.3 billion, and yet it seems to have similar levels of consumption of rhino horn – a product made up mostly of keratin, the stuff in your fingernails, however many Asians still wrongly believe it is a cure for a hangover, and other ailments.

“If the rhino trade were legalised the message it gives out is that the product works, and the number of consumers would skyrocket,” says Knights. “And why would they buy the legal regulated rhino horn when they can get the illegal horn cheaper – tax and duty free? We should learn from ivory. Right now you can buy a limited amount of legal ivory in china, but people continue to buy illegal ivory – because it’s plentiful and cheaper. What a legal trade does do is provide a channel for laundering poached ivory.”

Last year WildAid did a survey in China and 95% of people surveyed said the government should do more to help rhinos, and the same with elephants. As people become more educated they want to do the right thing, and then the next step is catalyzing that action. Rhino horn is a new phenomenon in Vietnam, but it’s a tradition that has been picked up from China and then promoted by shady sales people.

Photo credit: WildAid / United for Wildlife – Yao Ming, Prince William, David Beckham.
To counter act this, the “Stop Using Rhino Horn” campaign is a collaboration between WildAid, the African Wildlife Foundation (AWF), and the Vietnamese non-governmental organization CHANGE, and its focus is on Vietnam and China, the world’s two largest markets for consuming rhino horn.
In the coming years, the campaign coordinators will partner extensively with the media, as well as conduct attitudinal surveys, organize public events and education programs, and build local authorities’ capacity to help strengthen the campaign to achieve the desired outcomes.
“The thing that changed to make it worse is what you need to address – and that is demand,” says Peter Knights. “There is nothing more unsustainable than consuming endangered species.”

Any suggestions/comments? Share this story please, join the conversation on savingthewild.com Facebook and connect with the world’s thought leaders in the poaching crisis. 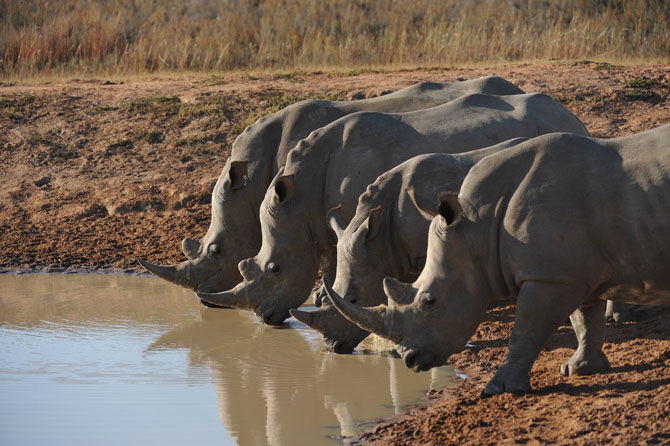