Africa, made by China (The Dirty Truth)

I recently returned from a 12 week mission, writing stories from the frontline of Africa’s poaching crisis, a witness to a war on greed where elephants and rhinos are now staring down the barrel of extinction. But what I also witnessed, in the six years passing since I was last living in Southern Africa, was the heart wrenching juggernaut destruction of the environment, and relentless mortgaging of priceless natural resources.

All roads lead to China, Africa’s number one trading partner after surpassing the US in 2009. But in order to understand how African leaders have allowed their natural heritage to be shredded in a very short space of time, it was imperative that I got my head around China in Africa politics.
Eric Olander is the founder of the acclaimed China Africa Project, an unbiased multimedia resource dedicated to exploring every aspect of China’s growing engagement with Africa. Olander has over 25 years of journalism experience at many of the world’s leading news organizations, including CNN, the BBC World Service, and FRANCE 24. He has lived, studied, and worked extensively throughout Greater China and Africa.

In this Element exclusive interview with Olander, we evaluate the stakes of what happens when China – Africa’s economic boom results into environmental doom.

Says Olander, “When you look at the choices that African leaders have in terms of their ability to finance a lot of projects that they desperately need to get their economy going – because without infrastructure there is no economic development – they can go to the typical financing mechanisms, either the private sector at atrocious rates that can bury them in debt, or traditional lenders such as World Bank, whom in the past have steamrolled them, and you have a classic case of political reform versus economic development. Most developing countries prefer to put that onto two separate tracks, whereas the west forces those together into a single track. And so China comes along and says they will not put pressure on Africa to reform.”
Chinese construction companies operating in Africa regularly come under scrutiny for unsafe work environments and shoddy quality of materials and workmanship. Olander goes on to say that these roads, railways, hospitals, airports and other huge construction projects, where impoverished Africans are often displaced for employment by some of the hundreds of thousands of migrant Chinese workers, are not intended to develop skills locally or transfer equity. 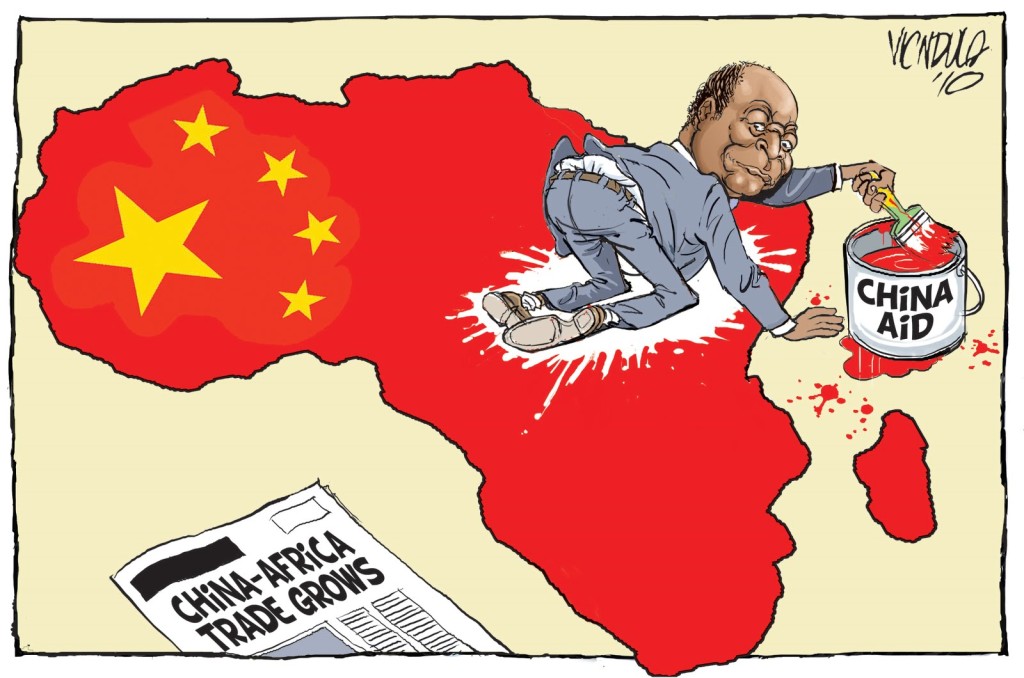 “The dirty truth is that most African governments don’t give a damn,” says Olander. “And there is no dispute that the Chinese management is very tough and raises genuine human rights concerns. In many ways they are just exporting their own often brutal form of management that they use on their own people back in China. Whether in China or Africa, they are equal opportunity exploiters, so in that sense there is no double standard. It’s not like the Chinese laborers are going to a nice hotel, and the Africans are going to a decrepit little hut. No, everybody is going to a decrepit little hut.”

At the start of this year China’s Foreign Minister embarked on a five nation tour of Africa. He stunned the international media while on his stop in Kenya, when he made a statement to CCTV Africa announcing that China will never follow the track of western colonists, and all cooperation with Africa will never come at the expense of the ecology, environment or long-term interests of Africa.

“I believe there are two things going on here,” says Olander in response to that speech. “The Chinese themselves are victims of western colonialism, and this scarred them tremendously. American warships up and down the Pearl River, the Japanese brutally colonizing them, the British carving up Hong Kong, the Portuguese taking Macau, and 300 000 people killed in the massacre of Nan Jing. These are things that shouldn’t’t be dismissed lightly. The point is when they say they will not follow western colonialism, they absolutely believe it in their core that they won’t do that, because they believe it would be hypocritical. Western imperialism was cultural, ideological, and occupational, it was all encompassing what they did in Africa, and the Chinese have no intention of doing that.”

In terms of the environment, Olander believes they will not follow western imperialism because there is no context in their history to do that. However they may follow the instinct of creating tributary states, and that in his view is a much bigger risk in Africa than imperialism and neo colonialism.

“A tributary relationship is the way China ruled South East Asia for a millennia,” explains Olander. “So here in Vietnam where I currently live, the reason why so many people despise the Chinese is because for a thousand years the Chinese ruled Vietnam. They didn’t deploy troops, they didn’t have an imperial administration, but they had so much financial control over the Vietnamese that these people had no option but to go to Beijing and bow their head to The Emperor and say, I cannot do anything without you because I owe you so much money. And that is my worry for Africa. Tiny states like Ghana, Zimbabwe and Mozambique are taking out these massive loans from China, and the Chinese end up becoming a tributary power controlling these countries by virtue of the amount of money invested.”

Photo credit: Youth 4 African Wildlife.
Eric Olander believes that if Africa has any hope of saving its identity as a continent of great natural treasures, then that hope is in the hands of its citizens who must demand more from their own governments to protect the people and their natural resources. Private impact investment and social enterprise needs to scale, with the assurance that investors are made accountable for the way they develop Africa’s finite natural resources. In today’s reality, the race for new thinking is just getting started.

Jamie Joseph is the founder of savingthewild.com – a platform to connect with global thought leaders engaged in Africa’s poaching crisis. Join the conversation on Facebook and Twitter.