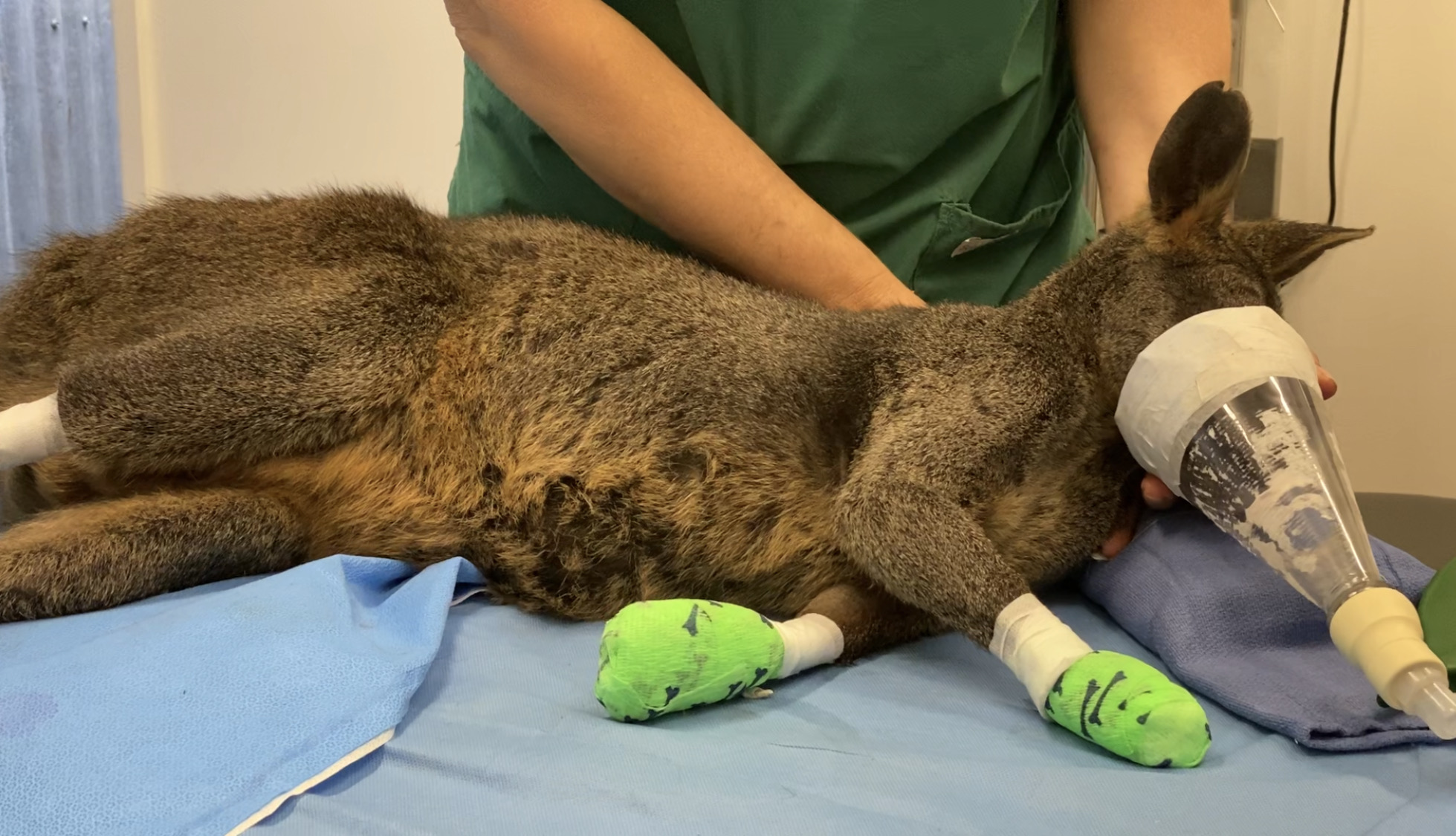 Australia bushfires: untold stories from the frontline of an apocalyptic wildlife disaster

Untold stories from the frontline of an apocalyptic wildlife disaster

By Jamie Joseph | All photographs by Adam Oswell.

“We were already experiencing unprecedented drought before the fires,” Conservationist and firefighter James Fitzgerald told me as he fed hand-picked eucalyptus leaves to Greta, an orphaned koala he affectionately named after the young Swedish climate activist. “Climate change is making our fire season longer, and the window of opportunity for saving this already vulnerable species is disappearing.”

The next day, 21 January, 73 year old President Trump took aim at 17 year old Greta Thunberg – and every other human not in denial – when during the Davos Summit he claimed we “peddle climate warnings of doom” at a time when his policies had ushered in a bright new era of economic prosperity for Americans.

James Fitzgerald’s 2000 acre Two Thumbs Wildlife Sanctuarynear Cooma in New South Wales had been severely hit by the 29 December bushfire, and he was sleepless with thoughts of another blaze taking what little was left.

Three days later a LockheedC-130 aircraft crashed not far from where we had stood beside Greta, discussing the bureaucratic inertia of government, both in Australia and around the world. Three Americans flying for a private Canadian company died trying to protect the remains of the sanctuary, as yet another fire raised its head like the devil and stole more lives.

I had touched down in Sydney one week earlier with a mission to deliver Comvita manuka honey medical supplies to vets and wildlife carers across Australia. I run the Africa based environmental organization Saving the Wild, and I had seen in the survivors of the poaching crisis that manuka honey has exceptional antibacterial wound healing properties. I thought because I had spent so many years in the presence of savagely butchered elephants and rhinos that I was mentally strong enough to handle the carnage in Australia, but nothing could prepare me for the massive scale of destruction, and the misappropriation of funds and resources.

Over a billion animals lost in Australia’s fires is the number dominating the headlines. That figure is rising beyond comprehension. Now with horrific habitat loss and the ever-present drought, the survivors are starving, while others run the gauntlet of cars in search of food, only to be knocked down before reaching greener pastures.

During the first week living out of a van and travelling across New South Wales, I soon realized that the wildlife charity with the biggest marketing budget had suddenly been swamped with millions of dollars in donations, whilst other dedicated groups on the ground ran ragged – with no time for social media, eat or sleep. And so I decided to focus on helping those who needed it most.

One of so many stories that illustrate this is that of husband and wife team, Professor Steve Garlick, who specializes in animal ethics and the treatment of PTSD, and his partner Dr Rosemary Austen, a general practitioner. The caretakers of Possumwood Wildlife Sanctuary, they have dedicated the last 21 years of their lives to saving more than 6000 animals. Rosemary works four days a week as a GP to cover most of the $80 000 annual budget needed to care for their rescues. They had over 100 kangaroos on their land when I visited, and she knew every one of them as individuals. Depending on the severity of the injuries, there were outside free-roaming areas, while those needing intensive care were monitored inside the house.

I sat on the floor with a roo stretched out on the sofa beside me, too weak to lift his head, while another found the strength to hobble across the room, all four feet wrapped in bandages. I felt my heart sink every time she fell down, before she eventually reached me and rested her head on mine.

Tragically, a lot of the kangaroos Steve and Rosemary have spent months rehabilitating have been released into sanctuaries only to be killed in the fires. Nowhere is safe anymore. They currently have 12 burn cases in care.

And then there is Dr Howard Ralph, often described by wildlife carers across the state as their “last hope” and “saving grace” because he gives life to wild souls most other vets would be quick to euthanize. The founder of Southern Cross Wildlife Care, he received the 2017 ‘Service to Humanity’ Alumni Award by Sydney University School of Veterinary Science.

A living legend in his seventies, he works two jobs to pay for the clinic services he offers for free to wildlife carers in New South Wales. The morning I met Howard he had worked his usual 16+ hour day, only to drive four hours through the night from his Sydney clinic to his Braidwood clinic, and do it all over again.

Because there is no money to be made in veterinary services to wildlife, and a lack of support from government, the training done in Australia is minimal. And thus, wildlife carers travel long distances to see Dr Howard and his experienced team of volunteers, rather than risk their animal in care being put down. I spent a day in the Braidwood clinic and operating room, and I saw their healing hands save koalas, wombats, kangaroos and wallaroos. It was both awe inspiring and terrifying, because there were moments where Dr Howard had to stop operating and jiggle with the faulty anaesthetic machine that had not been replaced due to lack of funds.

But by far the most terrifying of all is what I saw on “ground zero” Kangaroo Island. My first search and rescue “black walk” was 24 January near the border of Flinder’s Chase National Park, where I was welcomed by the team from Humane Society International. They had arrived three weeks earlier, straight after the 3 January blaze that wiped out the west half of the island; more than 200 000 hectares of wilderness.

“Where are all the search and rescue teams?” I asked Adam Parascandola. The HSI Senior Director of Crisis Response, he had flown in from the States straight after receiving the first field assessment report.

“We haven’t seen other search and rescue groups during the time we’ve been here,” replied Adam, a veteran of disaster relief who was also on the ground for the California fires. This floored me. During that first week of recovery HSI were picking up a lot of survivors, but by the time I got there we were down to the last. My day one we rescued two koalas and as far as I know they have survived. On my second day we rescued a joey wallaby and a kangaroo, and both were euthanized. Watching the kangaroo being carried from my arms to “the death pit” finally broke me as I crumbled to the ground. I have a blurry recollection of someone from the army putting a hand on my shoulder and trying to console me. I am told even the bravest of the brave break down every day.

The short stretch of landscape we had walked through just one hour earlier was littered with thousands of charred bodies and rotting corpses, and I had become dizzy with the thought of what might have been saved had there been hundreds of people searching for survivors instead of just a handful. We can never turn back the clock.

After further looking into it, I found that the RSPCA also had a small team doing search and rescue in Hanson Bay Wildlife Sanctuary in the south west, and they have just launched a second wave three-month Emergency Response Plan which will include the coordination of food drops that will cater for specific dietary needs in affected areas. Well done to RSPCA for cutting through the red tape as they now prepare to cover a lot more ground.

It’s never too late, but it almost is. It’s as if conservation groups didn’t realize they could access Kangaroo Island’s ravaged areas. Of the 400 survivors that had been brought in, half ended up in the death pit. Burnt and broken, dehydrated and starved, what is left out there are those hanging on by small miracles.

From all that I have learned during my two weeks on the frontline is that we are absolutely unprepared for the next climate disaster. Not just Australia, but the world. Next time it could be Africa, or America, or India. We can pounce on roos and koalas, and rush them off to vets, but we sure as hell can’t pounce on rhinos and lions, bears, or tigers.

Humans are being killed in the line of fire, and priceless biodiversity is disappearing right before our eyes. I can understand now why soldiers come back from war and struggle to talk about what they saw. What I experienced in the ash forests will haunt me forever; the sound of silence rings in my ears, and the stench of death stifles my breath. And if we as a global community do not take the lessons from the present, adapt and evolve, there will be no future.

Fight the good fight. And never, ever give up.