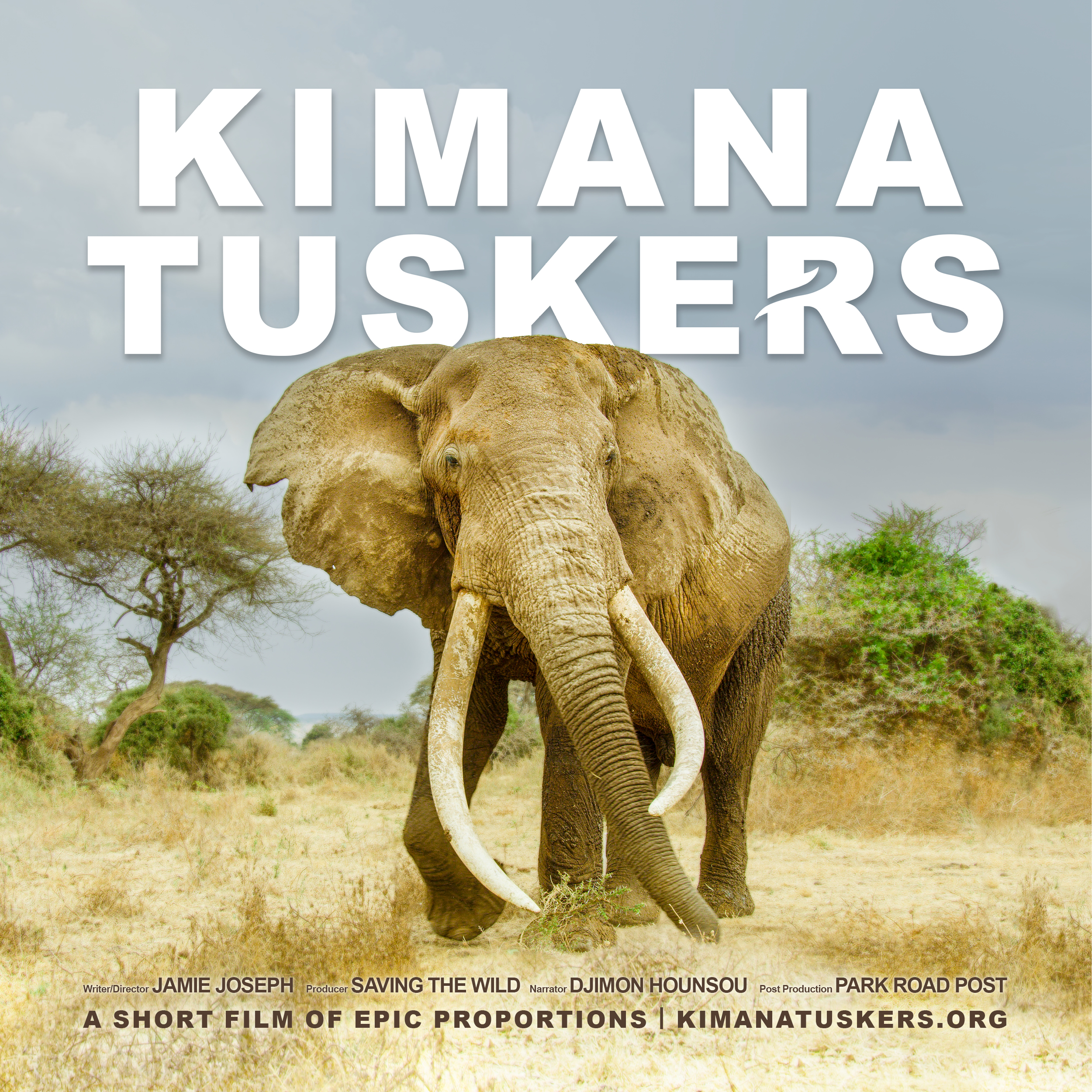 Press release: Kimana Tuskers – a short film by Saving the Wild
– The race to save the last great elephant tuskers from a vanishing landscape…

Written & directed by Jamie Joseph, produced by Saving the Wild, and narrated by two-time Academy Award nominated actor, Djimon Hounsou. With post production by Park Road Post; the Academy Award winning facility behind the Lord of the Rings trilogy.

There are fewer than 20 tuskers left on earth, where ivory still sweeps the ground. Filmed throughout the Greater Amboseli ecosystem in Kenya, Kimana Tuskers is a natural history short film of epic proportions. Follow the famous tusker known as Craig, and the younger elephant bulls who entrust their lives to him as they navigate a vanishing landscape through the Kimana wildlife corridor. This is the passage of experience, a brotherhood, built on respect, trust and loyalty, and what awaits them is the promised land, so that one day their sons will rise to be kings…

Founder of New Zealand charity Saving the Wild, Jamie Joseph is a wildlife activist widely recognised for her ‘Blood Rhino Blacklist’ and exposing massive state corruption driving South Africa’s rhinos into extinction. With mentors and support from Hollywood’s finest, she understands the power of film to drive change, but is far more comfortable behind the camera than in front.

Kimana Tuskers is Jamie’s directorial debut; a sonic journey with mesmerising visuals, this is her love song for Kimana.

With credits that include Amistad, Blood Diamond, Gladiator, In America and the forthcoming A Quiet Place Part II and The King’s Man, Djimon Hounsou was Jamie’s first and only choice to narrate Kimana Tuskers. Hounsou is a dedicated humanitarian and conservationist, and was born and raised in Benin in West Africa.

Says Jamie, “It’s been 15 years since Blood Diamond was released, and to this day the movie is still my reference point as goals to aspire to. Not just because of Djimon’s extraordinary performance, but because it revealed to the world the human cost of conflict diamonds and forced the diamond industry to clean up their act. Whilst Kimana Tuskers is in no way a political war thriller, the film does awaken the audience to what is at stake if we don’t act urgently to protect wild land from corporate greed. I’m really only interested in making films for change, and creating impact that is everlasting.”

To this end, the Saving the Wild Bee Keeping project has rolled out 200 beehives so far, right across the Kimana wildlife corridor, on land owned by the local Maasai people, with the first honey harvest slated for June. All profits from the sale of the honey are invested into an education scholarship fund for the Maasai landowner’s children, investing in the future conservationists of this last great wild place.

A Kenya film premiere will take place in Kimana during the honey harvest, with the Maasai community and bee keepers in attendance.

Kimana Tuskers was shot in 8K by 2020 BAFTA winner Bertie Gregory, who’s accolades include BBC’s Seven Worlds, One Planet and other Sir David Attenborough series. Jamie then flew back to Wellington, New Zealand so that post production could be handled by Park Road Post, who’s movie credits include Lord of the Rings, The Hobbit and King Kong. At the helm was two-time Academy Award winner, senior re-recording mixer Mike Hedges, with the score written by award winning composer Stephen Gallagher who has worked on projects with Peter Jackson, Brian Eno, Ed Sheeran and Nick Cave.

“Collaborating with Park Road Post has been a dream come true,” says Jamie. “Everyone in the team is just incredibly kind, passionate and talented. And then to have Djimon commit to the project, well, it’s certainly humbling to receive so much support, and I am forever grateful.”

Watch Kimana Tuskers – runtime 12 minutes.
There will be free daily screenings of Kimana Tuskers from 26 May to 30 June at the new Comvita Wellness Lab on the Auckland Viaduct, with an 8 seat immersive cinema room. 139 Quay street, Wednesdays, Thursdays and Fridays at 4:30pm and weekends at 2pm. See the latest cinema locations at KimanaTuskers.org and please do get in touch if managing a cinema location and interested in hosting the film. A worldwide tour is currently in the works.

Saving the Wild Bee Keeping Project
The greatest threat to the Kimana wildlife corridor is a vanishing landscape – habitat loss. And that’s why Saving the Wild and Comvita; world leaders in honey and bee products, joined forces with Big Life Foundation in Kenya to implement the Saving the Wild Bee Keeping Project. Saving the Wild Director Jamie Joseph will be back in Kimana at the start of June for the honey harvest, with profits from the sale of the honey invested into an education scholarship fund, and 70% directed at girls. The beneficial ripple effect of one education is long lasting, and can benefit an entire community. Adding to this, Maasai have large networks of social reliance, where income can support up to 20 dependents.

For those wishing to support the Saving the Wild Bee Keeping Project, please visit savingthewild.com/donate.