By Jamie Joseph
“There is a high possibility she’s not going to make it,” world renowned vet Dr Will Fowlds told us at the 30 December debrief just minutes before he darted Themba, a five year old female white rhino living on Amakhala Game Reserve in the Eastern Cape, and one of the remaining 20 000 white rhinos that have not yet been killed in Africa’s poaching crisis.
“She cannot keep her food down, and she’s been regurgitating. We’ve been struggling now for over two weeks to work out what the problem is, and we’ve finally resorted to bringing in a three metre endoscopy camera.”
I was sitting behind Dr Fowlds when we pulled up beside Themba and he darted her. The M99 drug pierced her left shoulder and she jumped slightly, alerting a dazzle of zebra thirty metres away that immediately bolted, before finding a new patch of grass to watch the show from.

But her best friend Lindiwe, a heavily pregnant eight year old white rhino, stayed by her side as the drug started to kick in and she became disorientated. We drove at a crawl pace beside her for two minutes, flanked by the 24/7 anti poaching support units on either side, and then Dr Fowlds got out the vehicle. He started walking straight up to both rhinos, because Themba was starting to veer into the bushes and the last thing we needed was for her to go down in an obstructed position. Lindiwe was trying to lead her young friend away, but by this stage she was wide eyed and wobbly, taking one slow step at a time. Dr Fowlds had a large cloth in his hands, ready to cover Themba’s eyes, and as he came up from behind and his hand touched her flank, Lindiwe suddenly charged three steps towards the human and her friend. She then suddenly halted, much to our relief, and the support units quickly rushed in to create a barrier between her and Themba. 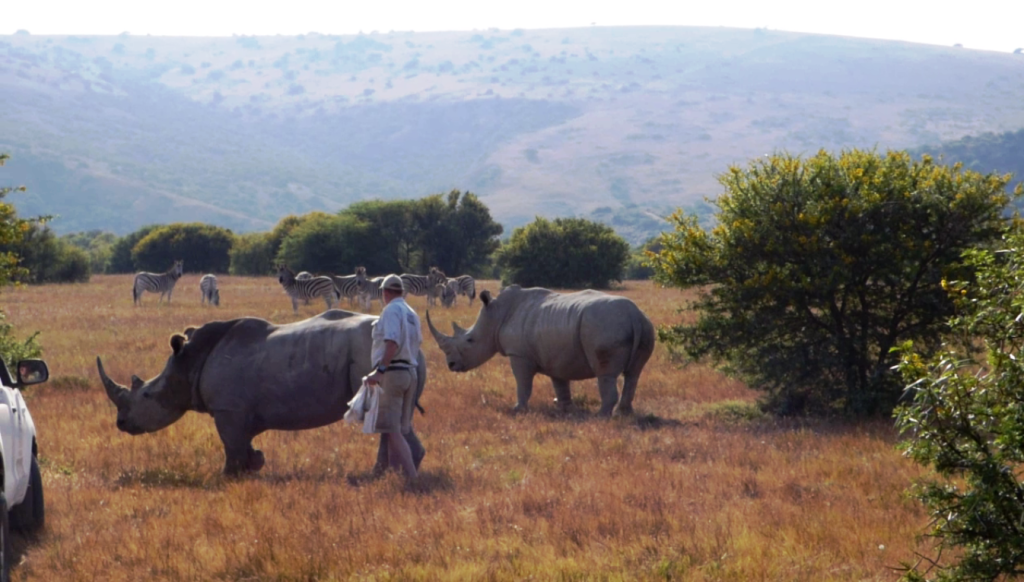 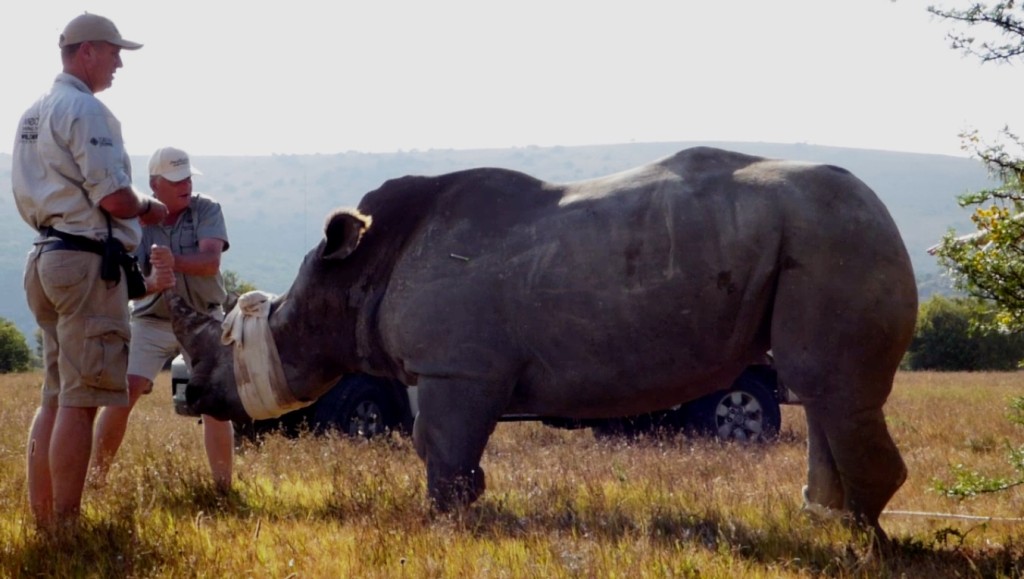 Photo credit: Jamie Joseph / Saving the Wild
Now with Lindiwe receded back 30 metres, Dr Fowlds covered her eyes and was joined by his brother Grant Fowlds, Ambassador for Rhino Art – a community development programme, and together they took hold of her horn and started leading her away from the thickets. Moments later she crumbled to the ground.
We surrounded her in a circle with support vehicles, and Dr Fowlds, assisted by UK based MediVet Dr John Smithers, immediately got to work. Her ears were blocked, two drips were inserted, and there were eight men on the ropes to hold her back in case she woke up and tried to bolt; she had been anaesthetised with a light anaesthetic as this was the fifth time in three weeks that she had to go under, taking a serious toll on her body.
We were in a race against time, but an hour into the procedure they still hadn’t found anything. I was circling nearby taking photos and videos when I heard a voice say, “I need to get a better look, take hold of the endoscope.” 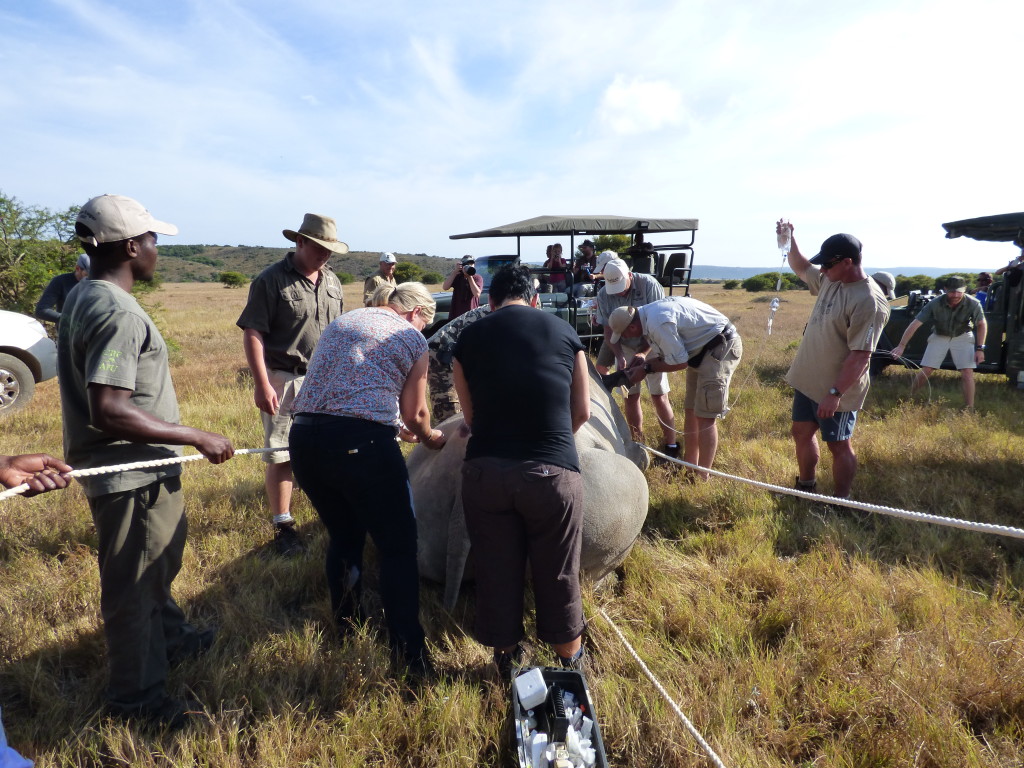 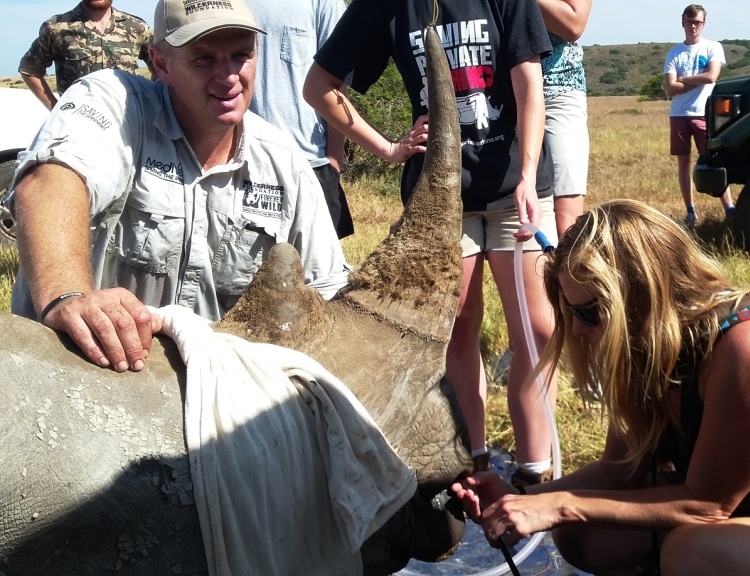 Dr John Smithers zoomed in and out with the endoscope remote control to get better visuals on the screen, Dr Fowlds stuck his hand in Themba’s mouth, and I was threading the endoscope between my thumb and index finger, advancing through her nostril. I looked up for a brief moment, my head dwarfed by her magnificent prehistoric head, and I noticed tiny little sweat beads forming on her soft lips. Blood started seeping into one of the drips, and her temperature was rising.

“Come on my girl,” I whispered. “Hang in there!”
For the next 70 minutes Dr Fowlds and Dr Smithers worked at a swift pace, navigating through the insides of this one tonne pachyderm, but there didn’t seem to be anything inside the oesophagus. The pressure seemed to be coming from the outside and blocking, but we couldn’t get the scope down there as it kept turning in on itself. Themba had been down for more than two hours, a very long time, and Dr Fowlds had to wake her up.
The team cleared out and we waited anxiously to see if she would wake up at all. A couple very long minutes passed, and then she slowly started to lift her head, and then stood up, one leg at a time. As soon as she was standing she let out a couple snorts, and groggily started looking around for Lindiwe who was already walking towards, her, her steps quickening as she got closer. Themba waited for Lindiwe by a bush, and as they met, Lindiwe gently rubbed up against her friend, and then slowly lead her away from all the vehicles.
The vets weren’t able to find anything that they can rectify, but at least the scope has enabled them to rule out one more thing. Dr Will Fowlds is relying on treatment now, which will hopefully reduce the size of the swelling.

What I can tell you is that Themba is getting the very best treatment possible, and to see a collective of people go to such great lengths to save one rhino is truly inspiring. With the species being decimated because of rampant poaching that the South African government clearly doesn’t seem to be motivated to stop, citizens of planet earth need to step up and be committed guardians of our natural world. It’s not easy; it’s a financial drain and an emotional rollercoaster, but right now every rhino counts in the battle to save the gene pool.

A real tug on the heartstrings is that Lindiwe refuses to leave Themba’s side. She grazes in circles around Themba, and if she walks away towards new grazing area and Themba doesn’t follow – which is a lot – she will go back for Themba and nudge her along, always encouraging her friend to keep on eating and stay alive! The psychological impact this friendship is having on Themba’s health is really quite profound. 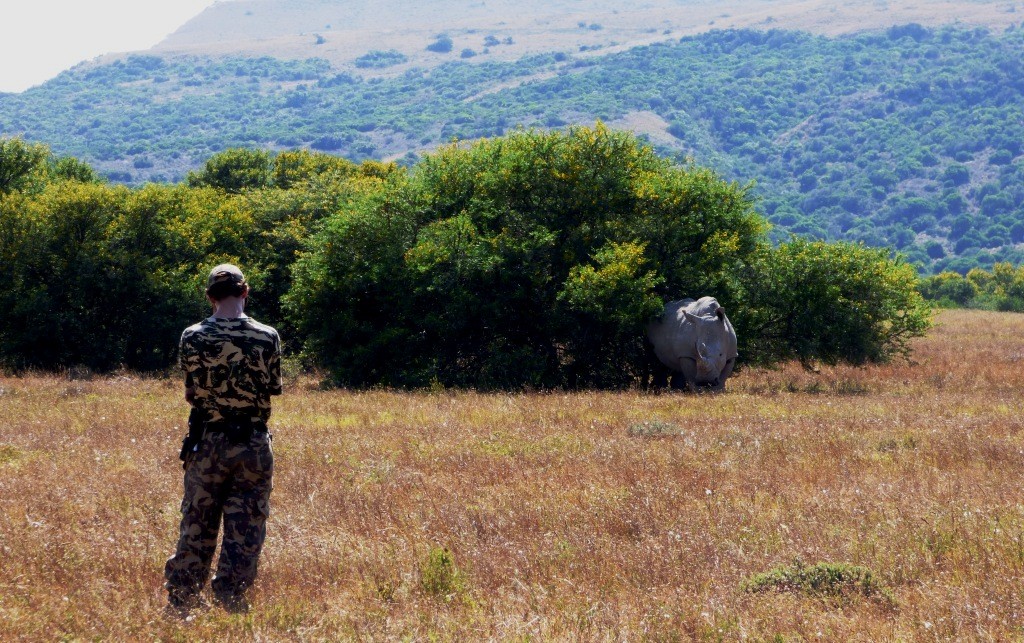 Photo: Lindiwe waits anxiously for Themba throughout the 2+ hour procedure.

Photo Themba (left) and Lindiwe (right) – Day 5 of Themba’s recovery.
Africa is in the midst of a wildlife genocide, where the insatiable lust for rhino horn in Vietnam and China is responsible for the butchering of these animals. Every chance we get, in any language we can get to, we need to put the message out there that these rhinos feel emotion, they have bonds and friendships just like we do. And the horrific suffering that they go through will become a haunting bloody stain on the history of humanity if we fail to end this war.
We must not fail. We must do more. Every rhino counts.

Jamie Joseph regularly writes stories from the frontline, working alongside Africa’s most pioneering conservationists. For updates on Themba and other stories, follow the journey on Facebook and Twitter.