AWF: Poachers, trophy hunters, and the battle for the horn

By Jamie Joseph
In part 1 of this interview I caught up with Patrick Bergin, CEO of African Wildlife Foundation, just a couple days before he headed off to Asia to drive a China-Africa dialogue on wildlife and sustainability. The interview ended with an idea that has the potential to be a game changer for the illegal wildlife trade. Read more about that here.
Traversing west, there is a thin green line between poaching and trophy hunting. The US ban on the commercial trade of elephant ivory has seen strong opposition from the hunting community. Trophy hunting is one of the more contentious issues – as in people that acquire a permit to kill elephants for sport – and, just like the poachers, the last remaining great tuskers are a hunter’s prized favourite.
The US ban sets limits on the number of trophies (elephant parts) that can be imported, and in April this year Tanzania and Zimbabwe were flagged with a temporary import suspension for the remainder of 2014 due to a catastrophic decline in their elephant populations.

Photo credit: Dex Kotze – Johannesburg Global March Organiser
In China, where there are around 35 legal ivory carving factories and 130 ivory retailers, owning an ivory carving is seen as a status symbol, but a lot of Chinese people still believe that the ivory is sourced from elephants that die a natural death. When a hunter shoots an elephant, and then mounts body parts of this endangered species onto his wall, well there is no grey area in ascertaining the cause of death. So which of these is morally less acceptable?

“If you look at the plummeting populations of elephants and rhinos,” says Bergin. “The huge decrease in their populations is a result of human induced mortality. So let’s look at all human induced mortality; poaching, sport hunting, and human-wildlife conflict. It is not justified, on the one hand, to say to a struggling African farmer, This elephant just destroyed your crops, but suck it up, because elephants are good for tourism. And then, on the other hand, allow trophy hunting to continue.”

Rhinos are far closer to extinction than elephants, and in South Africa, a country that accounts for around 80% of the world’s rhino population, dozens were killed in recent years in so called ‘legal hunts’ by South East Asian strippers, most of them originating from Thailand. They had never before held a gun but, for a few thousand rand, were bribed by syndicate players to lend their names to official hunting permit documentation. Julian Rademeyer’s thrilling read, Killing for Profit, has extensively documented the underbelly of this type of pseudo trophy hunting.
How this particular scam would unfold: The Thai strippers would embark on an all-expenses-paid safari, and after a South African hunter had illegally shot and killed the rhino for them, they would then jump in for a photo opportunity alongside the dead animal, holding a gun, and grinning triumphantly. 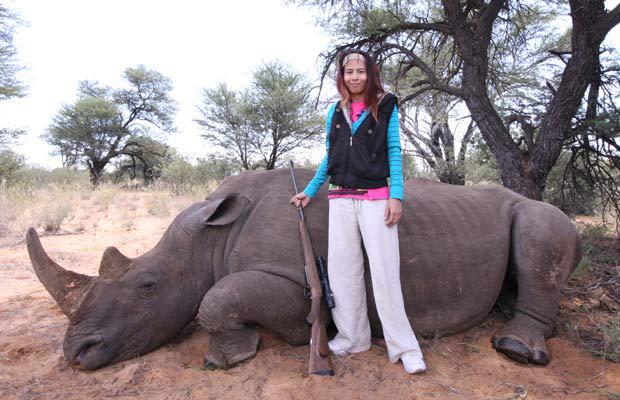 Photo credit: Beeld
But if you were to yank the chain of command, you would find a South East Asian ringleader behind the scenes, making at least 10 times his trophy fees investment when he sells the horns on the black market in countries such as Vietnam, Thailand and Laos. Corruption permeates every layer of the legal trophy hunting process in South Africa (and many other parts of Africa), but towards the end of 2012 people finally had something to celebrate when a rarity of justice was delivered. Chumlong ‘Chai’ Lemtongthai, the Thai ringleader responsible for so many of these illegal hunts, was sentenced to 40 years imprisonment. The win was fleeting. In his first appeal his sentence was reduced to 30 years, and on 25 September, in a shocking unprecedented move, South Africa’s Supreme Court of Appeal reduced the rhino horn trafficker’s sentence to just 13 years.

“I think the message we need to send during this time of crisis is that we have to completely stop all human induced mortality on endangered species,” concludes Bergin. “And you can’t send a mixed message about that. This needs to be a universal message.”

Speaking of mixed messages, I have just returned to my African homeland to report from the frontline of the poaching crisis, and I took this opportunity to ask AWF’s Chief how he feels about the South African government pushing to legalise the rhino horn trade.

“Well I’m against it, but here is one point we should all keep in mind,” he says, taking pause. “The CITES process is one country-one vote, and so when the South African Government’s proposal to legalise the rhino horn trade goes to a vote in 2016, South Africa will have exactly one vote. It doesn’t have a chance of a snowflake in hell of passing.”
So why would South Africa, 2016 CITES host country, enrage and shame their citizens by forging down this path?
“It’s confusing,” says Bergin. “At the moment, my understanding is the EU is against trade. That’s 28 votes. I don’t think the US is going to take it. Kenya is going to say no. There is a whole raft of countries against this. We only have to tip up to 55 votes against, and the blocking minority prevents it. You know what I’d say to South Africa? Don’t bother. Don’t do it. It’s hugely embarrassing to go to the conference and get 30 votes on the table. It’s happened in the past where people walk out sweating and feeling really quite ill.”
Earlier this year AWF launched a three-year, US$10-million Emergency Response Fund to advance actions under the key pillars of Stop the Killing, Stop the Trafficking and Stop the Demand. Visit African Wildlife Foundation’s website to learn more about their extensive work.

In related news…
Stand up to the poaching crisis and march against corruption
From Africa to Asia, there is no country where the elephant and rhino poaching crisis is immune to corruption, often delivered through the hands of people employed to protect what little wildlife we have left. On the 4th of October people across the world will have an opportunity to march against the lawlessness that is driving the extinction of our iconic species, and stand up to the people in power to put an end to this madness.
Read the full story.
Click here to join the march on 4 October and find a city near you. 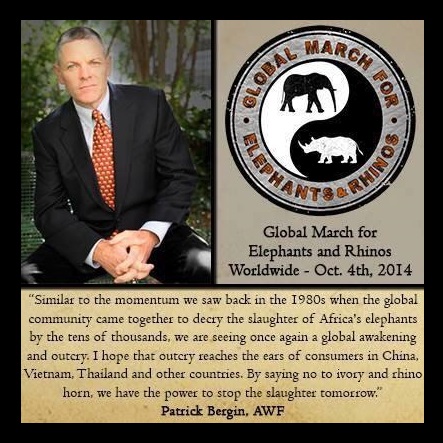