Sir Richard Branson leads the charge in race to save rhinos

By Jamie Joseph
South Africa is home to the majority of the remaining surviving rhinos, and was home to me until I immigrated to New Zealand in 2009. But then a couple years ago the call of the wild brought me back, and I have returned to my motherland to join the last stand in the race to save rhinos from extinction.
These magnificent prehistoric animals have roamed planet earth for more than 50 million years, and they are impervious to almost anything but a bullet. Every one of us that wants to see an end to the genocide of such an iconic species has a role to play in Africa’s poaching crisis, no matter what postal code we belong to. My words are my weapon, and every tourist that goes on safari is a deterrent to poachers, and every person on social media that shares stories that matter are another vital drop in the wave of change. And then there is the star power of the celebrity activists.
I work closely with WildAid, global leaders in wildlife parts demand reduction campaigns, and I am a regular contributor to Virgin Unite. Last month WildAid Ambassador Sir Richard Branson hosted a dinner gala in Vietnam, the main consumer market for the illegal rhino horn trade, alongside China. 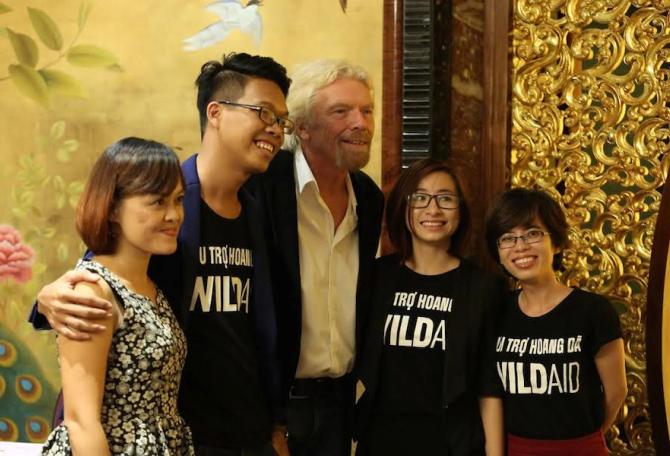 Photo credit: Wildaid Vietnam
Branson spends a few weeks a year at his eco conscious Ulusaba Game Reserve, which borders Kruger National Park – the dominant battlefield in this war on rhino poaching, and has witnessed firsthand both the beauty and the carnage. Says the environmental entrepreneur, “A little while back I saw a rhino that had been shot and butchered by poachers, and it’s a devastating image that is permanently etched into my mind.”
While in Vietnam The Virgin Group Founder met with some of the nation’s top business leaders as part of WildAid’s Stop Using Rhino Horn campaign, which aims to stamp out the myths of rhino horn’s medicinal benefits, of which there are none, as rhino horn is nothing but keratin – the stuff in your fingernails. Veiled malicious marketing campaigns are driven by criminals and pro rhino horn trade lobbyists, pushing the black market price up to US$100 000 per kilo, more than gold and cocaine. And as ridiculous as it sounds, owning rhino horn is also considered a status symbol among wealthy elite in Vietnam.
In Ho Chi Minh City, Branson hosted an intimate dinner organized by several non-governmental organizations including WildAid, African Wildlife Foundation, Wildlife Conservation Society and CHANGE, and in collaboration with Virgin Unite, Nhip Cau Dau Tu magazine and The Reverie Saigon. During the event, business leaders signed a pledge in which they committed to never buy, use or gift rhino horn.

Says Sir Richard Branson, “Listening to 25 of the country’s leading entrepreneurs around the table, it is promising to hear that the issue has already become part of a national conversation which is bringing shame to a country of 90 million people entering the global market space. The wheels of politics turn slowly, coupled with a lack of interest in conservation, but the younger Vietnamese do not want to be associated with this vile trade, and here lies an opportunity for mobilization.”

Lifting a lesson from history, between 1970 and 1993 the black rhino population was almost completely wiped out in the previous poaching crisis. Taiwan, once the biggest consumer of rhino horn, isn’t even on the map anymore as a result of education, demand reduction campaigns and strict domestic laws.

Photo credit: WildAid Ambassadors Sir Richard Branson and Yao Ming
In addition to reducing consumer demand for rhino horn in Vietnam, the business leaders discussed the importance of persuading South Africa not to push for the legalization of the rhino horn trade, as some have proposed.

Explains the WildAid ambassador, “We need to make conservation and protection of rhinos more valuable than the sale of their horns. Legalising the rhino horn trade would only cause the demand to skyrocket, sending out an immoral message that the product actually works. This legal market would then become a front for the illegal market, and the incessant poaching will drive the tourism industry into disarray, costing Africa millions of jobs in the next decade, and fuelling more poverty and conflict.”

But back in Africa, apathy and corruption is permeating every level of law enforcement, and often the people put in charge to protect our natural heritage are the ones causing the most harm. Even if we do crush the demand, what happens if a new market emerges a decade from now?

Rhino poaching is exploiting Africans living in poverty – fathers and sons living near wildlife areas are being recruited by global wildlife trafficking syndicates to poach rhinos, risking their lives for very little financial gain. All the while Asian king pins are building empires by gambling on extinction.
My current mission, ‘solving poverty saves wildlife’, presents solutions to Africa’s poaching crisis, and produces a rolling narrative of successful community conservation stories and blueprints that can scale. Over the past few months while travelling through Zimbabwe, Zambia and South Africa, I have seen with my own eyes that when rural Africans are empowered to be guardians of their natural heritage through meaningful employment poaching literally collapses.

As Sir Richard Branson so urgently points out, “There is a real need for the international community to step up and help these African countries build the capacity to effectively monitor and protect animal populations.Education is power, and the only way to educate is by raising awareness. Both in Africa and globally, we need a lot more people to take action and make a positive impact, before it’s too late.” 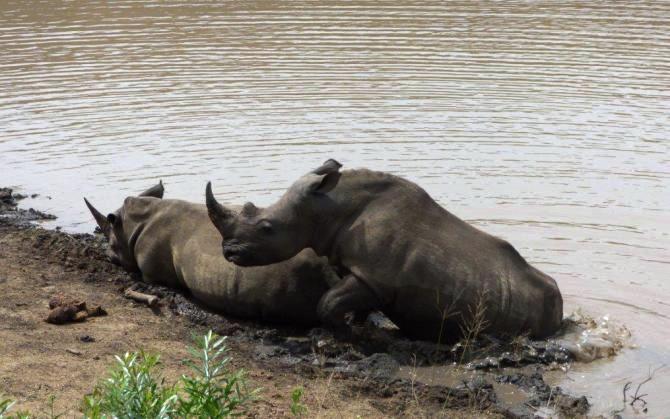 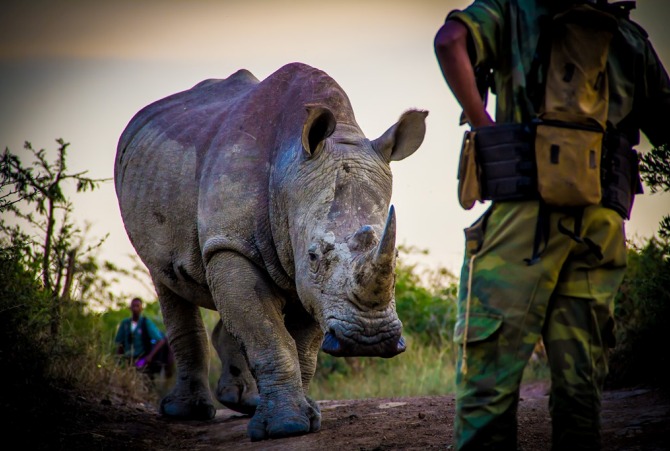 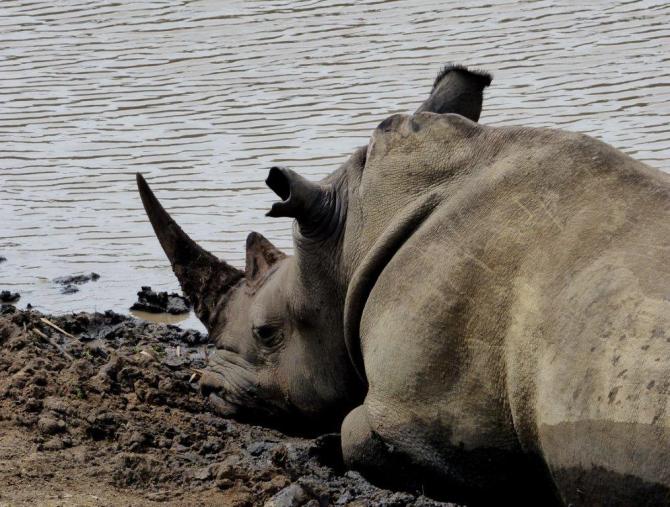 Photo credit: Jamie Joseph / Saving the Wild
I am currently on assignment at Thula Thula Game Reserve, in Zululand, South Africa. This breathtaking wilderness was founded by Francoise Malby-Anthony and her late husband, maverick conservationist Lawrence Anthony, whose adventures included negotiating with war lords in Garamba National Park in 2006 in a valiant effort to save the last handful of northern white rhinos.
A groundbreaking partnership has been formed between Thula Thula and the neighbouring Zulu chiefs and their communities, who have since gifted 1000 hectares of land and infrastructure, and out of this was born the urgently needed Fundimvelo Thula Thula rhino orphanage. Seed funding was granted by international animal welfare organization Four Paws, and the upkeep of the rhino orphanage is maintained through public donations. Protected by 24/7 armed security, the orphanage is a sanctuary for traumatised calves that have witnessed their mothers being shot and sliced. And with just 20 000 rhinos left in the wild, every individual rhino is vital to ensure that sufficient animals are protected to safeguard the genetic viability of the species.
Baby orphan Impi is now four months, and was discovered by his mother’s side, drenched in her blood and body fluids six days after she was killed. His left hip was severely stiff and his right eye bulged out, possibly a knock from poachers when he tried to intervene. Not having a horn is what saved him from certain death. He’s still not over it, and sometimes cries, but after a few weeks of enduring love, and around the clock care from his human foster mums, he is becoming curious and affectionate.
I watch these little fat buttocked unicorns playing in their back yard, and I have so much gratitude for the people that go to great lengths to keep them safe. In about two years time these orphans will be released back into the wild and I have to believe that by then the rhino poaching crisis will be behind us, because Africa without its amazing animals is an Africa without soul.
The race is on to save the greatest fairytale on earth. 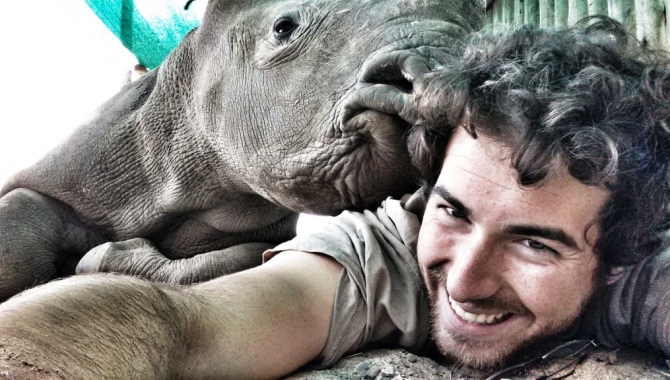