By Jamie Joseph
At the time of interviewing Patrick Bergin, CEO of African Wildlife Foundation (AWF), I am in Bali on route to South Africa, a few weeks out from joining the IAPF rangers on the frontline of Africa’s poaching crisis. The conversation begins with a few false starts as my internet connection keeps cutting out. I message him to say I am scooting over to another hotel… “Back in ten.”
Patrick Bergin is a patient man, and it is a virtue that must come in handy as he navigates the political terrain of the illegal wildlife trade. At the helm of this US$22.7 million conservation organization, the Illinois native earned his bachelor’s in English and his master’s in agricultural education. Fine tuned communication skills are particularly vital when dealing with major grant-giving organisations such as Rockefeller and Google, all the way up the political ladder to heads of state throughout Asia and Africa. Aimed at protecting wildlife and landscapes, as well as empowering African people living near wildlife to be stewards of their natural heritage, Patrick Bergin has steered AWF through a vast expansion and doubled the number of countries in which the organisation operates. 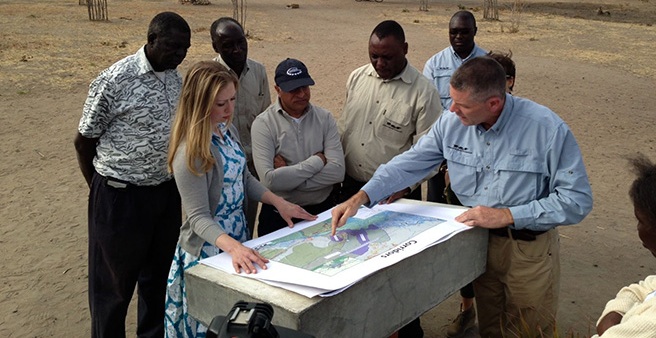 Photo credit: Last year Patrick Bergin hosted Chelsea Clinton (Clinton Global Initiative) in Zambia. Photo by John Butler.
Fluent in Swahili (the lingua franca of eastern Africa), Bergin is based half the year in Nairobi, Kenya and the other half in Washington, DC. It’s Friday morning in the US when I catch up with him, and he’s about to set off for a trip to Asia.

“The reason we’re going to China is because AWF and the Aspen Institute are driving a China-Africa dialogue on sustainability and wildlife,” says Bergin. “This is our first time getting together a group of influential Chinese, and we’ll be holding two sessions; one in Beijing and one in Tianjin. The objective is that this will become a two-year policy dialogue, with the Chinese coming to Africa twice, and then eventually becoming advocates in the realms of their own society and governments, in relation to more commitment to sustainability around the whole China–Africa trade investment issues.”

Clearly business leaders in China have a major role to play in preserving habitat and saving Africa’s wildlife, because the ones at the top of the business ladder also tend to have very strong links with government. According to Bergin, “a Track I dialogue is government to government,” with the downside being that government members want to save face and read from a script.
The benefit of a Track II dialogue, however, is that you connect with people that are not constrained by official protocol, and they can get vocal on critical issues and say “this isn’t good for long term sustainability of trade relations between Africa and China,” explains Bergin.
And with that door open, I cast my eyes to the elephant in the room. 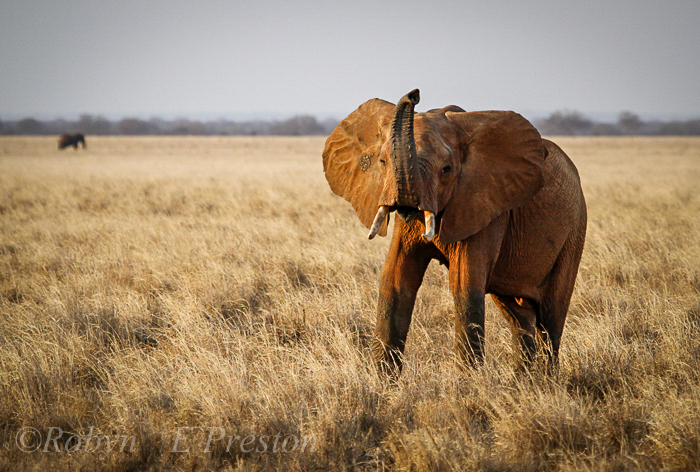 The leverage here is that China is big business in Africa. China wants Africa’s natural resources, but China continues to allow a legal trade of ivory, and this legal operation is often a cover for the illegal ivory trade – all of which is driving Africa’s elephants towards extinction. Something has to give.

“They shouldn’t allow ivory to derail the bigger picture,” says Bergin.
I ask Bergin if, through his dealings with China, anyone has ever actually said the government may shut down the ivory carving factories.
“I am not aware of any specific dialogue on addressing the factories,” says Bergin. “I think Hong Kong is moving quicker than the rest of China, and there is a strong local lobby for bans and stockpile burns, and the hope is that the rest of China will follow.”
I raise the point that ivory is a minuscule contribution to China’s economy, but the decimation of elephants is destroying not only Africa’s iconic species, but it is also fuelling conflict and terrorism, derailing tourism, and creating more unemployment and poverty.
“Yes, exactly, and there are only about 6 or 7 organisations making money on ivory,” continues Bergin.
Right, so why don’t the African leaders ask China to shut down their carving factories?
“A few weeks ago President Obama hosted a meeting with five or six African heads of state, and the general feeling was that they were intimidated by the prospect of upsetting China – that it would be easier for the US to make a big deal of this,” explains Bergin.

“Well I think everybody needs to make a big deal of this. There has been a drumbeat of activity in the West, and I do think the US has shown leadership on the illegal wildlife trade, and then there was the conference in London in February, and I was talking to the UK Minister of Environment about this and, in my mind, the centre of gravity and influence now needs to move East. Why don’t we invite China to host the next big illegal wildlife trafficking symposium?”

“Now that’s a great idea!” I exclaim with a sudden burst of hope.
“And in doing so,” says Bergin, “Put the onus on China to clean house so that they can host the conference with pride.”

In part 2 of this interview I will be catching up with Patrick Bergin while he is in China. On the agenda: South Africa’s rhino horn debate, the impact of modernisation on Africa’s wilderness, and the empowerment of African communities living near wildlife. Part 2 will be posted during the week of 15 September.